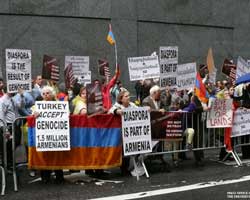 The Armenian Diaspora expressed its desperate protest against Serge Sargsyan?s policy in connection with the normalization of the Armenian and Turkish relations stating it is made on account of the genocide denial. Protests were carried out both before Serge Sargsyan?s pan-Armenian tour and moreover during it. Almost in all the cities of the world where Serge Sargsyan went to meet the Diaspora, huge protest actions were held. The actions left their impact on Serge Sargsyan himself and on the international community too.  Almost all the world mass media means, dwelling on the Armenian and Turkish relationship, stressed Serge Sargsyan?s policy is unacceptable for the greater part of the Armenian Diaspora. The protests influenced also Turkey the prime minister of which stated that Armenia had better neutralize the Diaspora?s influence on the decision-making process taking place in Yerevan.

Nevertheless, on October 10, the protocols were signed and Serge Sargsyan did not resign under the repression of the Diaspora. Moreover, the resistance of the Armenian Diaspora transformed. A regular resolution on the recognition of the Armenian genocide was introduced before the U.S. Congress. The head of the Catholicosate of the Great House of Cilicia Aram I issued a rough statement as well as the Armenian ambassador to Switzerland, the worldwide known Charles Aznavour. The Armenian traditional parties ARF Dashnaktsutyun, the Liberal Ramkavar Party and the Social-Democratic Hnchakyan party also expressed their protest against the ratification of the Armenian and Turkish protocols at the national Assembly.

The Armenian community of Greece has organized a collection of signatures against the signature and ratification of the Protocols, joined 2,810 people. In the Canadian city of Toronto, a protest involving about 300 representatives of the Armenian Diaspora in Canada took place. Similar protests are taking place in other cities in the world. They are not covered by the Armenian press, but it is obvious that the resistance of the Diaspora is not broken, and it will continue to fight. The symptomatic is that it takes place against the backdrop of utter apathy in Armenia.

There is another factor that has already been in circulation. There were harsh statements from Karabakh Armenians who do not belong to the Diaspora, nor to Armenia. ?No one in Yerevan and Stepanakert, has doubts that if the U.S. and the EU comply with the resolution of the conflict under the condition of recognizing the status of Nagorno-Karabakh and the resumption of Turkish-Armenian relations, Armenia?s radical opposition with the support of the population of Nagorno-Karabakh, will organize a nationwide resistance movement. This will not only change the power in Armenia and Nagorno-Karabakh, but will also bring about a complication of the situation on the Karabakh-Azerbaijan border to the possible resumption of hostilities ?, – wrote the famous site Geopolitika.ru.

Positions of the Diaspora, of course, affect the foreign policy decisions in Armenia. However, for the full impact the world-spread Armenians will need mechanisms that lack. The institutionalizing participation of Armenian Diaspora in the policy of the state is already being discussed at different levels. Statements on this topic are voiced from the governmental camp too: Serge Sargsyan does not cease to claim that without the Diaspora, Armenia is a 3 millionth country without resources, and together with the Diaspora it is 10 million people with great potential. How this potential will be realized, through what mechanisms is not clear. For a long time, Diasporan Armenians led the country?s foreign policy: Raffi Hovhannisyan, Jirayr Lipartityan, Vartan Oskanian. The Diaspora was not let come near to the internal affairs. But it is already clear that the Diaspora cannot continue to be indifferent to the decisions taken in the domestic politics, the elections in Armenia. The mission of the Ministry of Diaspora must be the development of a project of the institutionalizing participation of the Diaspora in Armenia?s life. After all, says Serge Sargsyan, without the Diaspora, we have only a 3 millionth poor country, surrounded by bad neighbors.