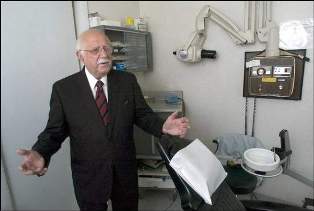 Dr. Hagop Martin Deranian says he was destined to write a biography of the man who pioneered the specialty of plastic and reconstructive surgery.

Certainly the fact that Dr. Varaztad H. Kazanjian was a fellow Armenian created a bond between the two men. And having Worcester in common could only have strengthened the ties. After escaping oppression in Ottoman Armenia, Dr. Kazanjian, who was 16 at the time, came to Worcester and worked in the wire mills. Dr. Deranian is a Worcester native.

But there?s little question that, as a dentist, Dr. Deranian has a special appreciation for Dr. Kazanjian?s extraordinary, far-reaching accomplishments.

Dr. Kazanjian became a dentist and then gained widespread renown for his innovative methods of repairing severe facial wounds on the battlefields of northern France during World War I. He then returned home and earned a degree from Harvard Medical School. He went on to become a world-famous plastic surgeon.

In 1931, Dr. Kazanjian was called to Vienna to make an appliance for Sigmund Freud, who had lost a large section of his jaw to cancer. The hand-made appliance was so much lighter and more comfortable than previous models that Freud was prompted to call Dr. Kazanjian ?a magician.?

Dr. Deranian started working on his biography of Dr. Kazanjian 30 years ago. Last month, ?Miracle Man of the Western Front? was published by Chandler House Press of Worcester. The book is filled with rare old photographs, as well as illustrations of medical procedures. It is a profile that combines the personal and professional lives of the kindly and unassuming surgeon, who, in Dr. Deranian?s view, experienced the ultimate fulfillment of the American dream.

During a recent interview in his dental office on Main Street, Dr. Deranian proudly handed over a framed photograph of himself with Dr. Kazanjian. The picture was shot 40 years ago at the centennial of the American Academy of Dental Science, and both men are clad in tuxedoes.

The two had first met years earlier. Dr. Deranian, a graduate of Clark University, was in his final year at the University of Pennsylvania School of Dental Medicine. Dr. Kazanjian was in Philadelphia lecturing on oral surgery to graduate students. Dr. Deranian enthusiastically introduced himself, having, as a child, heard stories about Dr. Kazanjian?s years in Worcester.

?Meeting him was almost anticlimactic,? Dr. Deranian remembered. ?He was a hero to the immigrant.?

Later, Dr. Deranian practiced dentistry in Boston, just a few doors down from Dr. Kazanjian. Dr. Deranian had an interest in complex dental repairs using custom appliances. On several occasions, he scrubbed in with Dr. Kazanjian on cleft-palate surgeries.

After serving in the Navy, Dr. Deranian returned to Worcester and set up his practice. He would see Dr. Kazanjian from time to time. ?He was very interested in keeping abreast of Worcester news,? Dr. Deranian said.

Even as a young man, Dr. Deranian had it in mind to write a book on Dr. Kazanjian. After Dr. Kazanjian?s death in 1974, his widow wrote to Dr. Deranian, saying, ?Dr. Kazanjian always felt very close to you and spoke of you often.?

Dr. Deranian dug in. To tell the story of Dr. Kazanjian?s early life, Dr. Deranian read correspondence and articles in Armenian and searched for pictures of the town where he grew up. He tracked down people who knew Dr. Kazanjian in different phases of his life and spent hour upon hour poring over a wide range of material, including the classic text ?The Surgical Treatment of Facial Injuries,? written by Dr. Kazanjian and Dr. John M. Converse.

Dr. Kazanjian?s World War I experiences, starting in 1915, are particularly fascinating. As a member of a unit sent by Harvard to help the British medical team, Dr. Kazanjian began by treating British soldiers for a host of dental problems. The British were astounded at the American ?dentist-doctors,? whose treatments cleared up a range of related health issues.

As the war progressed, increasing numbers of soldiers were engaged in trench warfare and suffering from horrendous facial wounds. The injuries often were so disfiguring and the methods of repair were so elementary that some victims wore tin masks for the rest of their lives.

Dr. Kazanjian was eager to help; he was ambidextrous and worked very fast. His techniques were brilliantly creative. His three-month stay was extended to three years.

Dr. Deranian quotes from a letter that Dr. Ferdinand Brigham, an American dentist serving with Dr. Kazanjian, wrote to his father:

?We naturally call our cases ?fractured jaws? but ? there usually goes with this condition a mutilation of the face, nose, head, throat, etc. which can easily result in a bad deformity for life.? A high ranking British medical officer ?was very insistent that we remain,? realizing ?that if Dr. Kazanjian will stay, countless men can be saved from mutilation and even death.?

The British expressed their gratitude to Dr. Kazanjian by bestowing on him in 1919 the highest honor given a foreigner, investiture into the Order of St. Michael and St. George.

Yet, as an immigrant, Dr. Kazanjian had to prove himself over and over. Dr. Deranian noted that even after returning to the U.S. following World War I, Harvard Medical School did him no favors. Dr. Kazanjian had to follow the same curriculum as students 20 years his junior.

?I wanted to make sure it would be a realistic biography, but there also had to be an appreciation of his clinical accomplishments,? Dr. Deranian said.

What set Dr. Kazanjian apart was his ability to perform surgery and make innovative oral appliances. ?He rose and crossed borders,? Dr. Deranian said. ?It?s that link between two specialties.?

The book costs $39.95. The Worcester District Medical Society has provided a grant for distribution of copies to Central Massachusetts libraries.

As Dr. Deranian held a copy of his book, he smiled and said, ?I wanted it to be first quality. The man and the occasion deserved it. I keep thinking of the word ?dignity.? He gave the profession dignity, and he represented the American dream.?