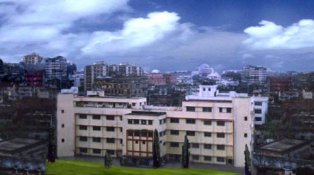 The Armenian College, one of the oldest Armenian schools in the world, was established on April 2, 1821 in . Since then it has played a significant role in shaping the future of thousands. The whole Indian Armenian community life is reflected in the story of the College. The College has a neat “unofficial” website, dedicated to all the boys and girls who attended the and the Davidian Girls' School of . Many of these former pupils are scattered all over the world pursuing successful careers, mostly in , the and . The goal of the site is to collect material related to the school and make it known to the public. It is designed by Vardan Hovhannisyan, Peter Osipof and Zorab Ohanessian, all ex-pupils of the .

Since lot has been said lately about the mismanagement of the Community affairs in (see previous postings under “Indian Armenians”), it is a good idea to have a look at the forum hosted in the same website.

Armen Lucas, an ex-pupil writes about his impressions after paying a visit to his beloved old time School:

Our visit to the Armenian College:

We, all 4 of us visited Mrs. Sonia John, strictly by appointment, at the Armenian College. We had a firm appointment, and were initially asked to wait at the gate by the Chaprasees. We were finally shown in to the big office, shared by Mrs. Sonia John and her secretary, Coleen Blanche. The interview took 3.5 hours, and we asked ALL the questions which you had asked us to put to her.

I will first report on the Q and A, and then will put forward our views. Our kids, Karineh, aged 20 and Stefan, aged 17 were also present during the interview, but they left half way through to go and talk to the Hye kids, and play basketball with them, and visit their dormitories, etc. They enjoyed their tour of the school, and the kids also enjoyed meeting the 2 strangers from , and speaking Armenian with them.

1. I asked about the teaching staff, and was told that they only had 3 Armenian staff, from Hayastan. There were also a few Indian teachers. During the last 2 older classes the kids had to attend an , but they could sleep in the College…because they didn't have competent teachers for the bigger kids. She also added that she thought it was good for the bigger kids to mix with kids from the outside world, as they were too protected within the confines of the school.

2. Sports: The kids had sports organised normally every afternoon, and also had an official Sports Day, when prizes were given and special food was organised for them.

3. I asked for OLD photos for sports dating back to your time, but these were not made available to me. There were school almanacs, but it was difficult to dig out the info.

4. The current student body consisted of: 60% Hayastansis, and 40% Parskahays. Sonia John informed us that the kids were allowed to return to their respective countries once EVERY 3 YEARS. Most kids, she alleged had come from broken and poor homes, and a few had returned to the School very disturbed after visiting their families…

5. No class photos were made available to us. We did however take a lot of photos ourselves, and these will be forwarded to you via the internet shortly.

6. The school appeared to be run efficiently, in a very strict manner. Discipline is considered very important, and no unruly behaviour of any kind is tolerated. The kids appeared to be, looking from the outside, perfectly happy, but remember, we were only there for a total of 4 hours.

7. The current Principal could be considered to be Sonia John, but the Head master is an Indian guy. An ex. student called Michael J. Stephen is the Asst. manager, and he was very helpful to us.

Our views: We had a visit by Arsham Sookias every morning for breakfast at our hotel; he seems to be a really decent chap…quite harmless. We also met Haik Sookias at the races on X'mas day. Both brothers are pretty upset at having been ousted from the Armenian committees of the Church as well as from the . I was unable to discover the real reason why this huge rift took place. The Sookias brothers had their opinions, and Sonia John had hers. Sonia alleged that the Sookias brothers were trying to stop the continuation of the as a fully functioning institution of learning for Armenian kids. She also accused Haik Sookias of trying to sell the School to Indians by having them on the Board…?

Sonia also alleged that she had had a lot of interference and malicious gossip from an old boy called Galstaun, who lived in ; this had resulted in Court cases and lots of back-biting and very negative publicity against the School and also against Sonia in person. The Sookias brothers alleged that Sonia was a power-hungry authoritarian, and that she just wanted to rule ALL the Armenian Committees on her own, without interference. It was also alleged that Sonia had got rid of 2 or 3 Armenian priests from …having accused them of all sorts of wrong-doings.

All in all, we considered this extraordinary situation as being very unfortunate for the students, and not at all beneficial to the small community.

I questioned Sonia about the various accusations of her squandering Armenian Church money to Indian charities, and associations, and she freely admitted that she had done so, but gave her reasons that she thought it wise to give money back to , for showing kindness towards the Armenians… She had also given a lot of money to various Charities, like : 2 X Heart Wards, Sir Cachik Paul Chater Ward, an , and various Cancer Wards. She had also created a Garekin 1 Scholarship Fund for post graduate students to study at various universities in .

All the kids were given Rs. 1500 each every X'mas for shopping money. Sonia considered the security of the school as being very important, and nobody was allowed IN or OUT of the school without her express permission.

At this stage an old boy and his wife turned up and asked to be let in. The Chaprasees kept them waiting for ages at the gate, and they were finally allowed in to the waiting room, and after an hours wait, they left, without seeing the school, or Sonia John! Sonia's reaction was that she thought they wanted money! The infirmary had 14 beds. There is a man from called Souren Babakhanyan who works there as a sports and general teacher; we met him.

It is our opinion that it is a real shame that Sonia decided to oust the Sookias brothers from the various Committees; she now runs the Church Committee and all it's huge pot of money…ON HER OWN. We feel this is a dangerous precedent, and is absolutely not being run in a democratic manner. Sonia is obviously, in her opinion, doing a lot of good work for the school, but we got the feeling that she ran it as an authoritarian, without any semblance of communication without any one else in the outside world. This undemocratic manner of single-minded management technique is a dangerous precedent, as there is no one else to control the decisions she makes with the College, as well as with the vast funds held in the kitty of the Church. Sonia said she sends her 'Hisab (Accounts), to the Armenian Church in Hayastan on a yearly basis.

We examined the Armenian Sports Club, and regret to inform you that it was in a very run-down state, and appeared to be totally neglected. This will be particularly sad news for all you Rugger players out there.

The Armenian Old Peoples home is being run by our very own Uncle Charlie Sarkies, (father of Margaret and Joe Sarkies), known to all as Uncle Cha Cha. We visited him and we spent some precious time together; he is doing sterling work in looking after the Church, the Old peoples home with it's nursing staff, as well as the Armenian cemetery, all of which we visited. Uncle Charlie, as Manager of the Old People's home, also comes under the authority of Sonia John. Thus, it would appear that Sonia is running THE WHOLE SHOW, SINGLE HANDED. It is a pity that she does not permit any form of dissension; nor does she permit anyone else on to HER committees. This form of single-rule policy, I repeat is very dangerous, and in our opinion should not be permitted.

There is no doubt that Sonia believes she is doing a good job; however, after interviewing the Sookias brothers, Uncle Charlie, and Sonia John, we think there should be a fairer method of management than the one she imposes on all 3 committees. Other older Armenians who have a great deal of experience of running these committees should be consulted before making momentous decisions re. the School and giving away Armenian Church funds …willy-nilly. I believe a FAIRER, MORE DEMOCRATIC method of MANAGEMENT should be adopted.

Sonia John informed us that she was abundantly aware of all the accusations being made against her, from Armenians all around the world, and she said she had no intention of going on line to defend herself, as she felt she had not done anything wrong. It made me very sad to witness this rather messy scenario; it is a pity the Armenian community in , as small as it is, cannot get together to combine their forces to keep this very small community together, without constant bickering and false accusations.

I volunteered the services of Zohrab as the future new Principal of the College, and she asked about his qualifications. She said she welcomed him to apply for the post, should he feel he was suitable.

Please feel free to circulate this letter to all your friends, so they can catch up with currents events about their wonderful old school. I will be sending you some lovely photos shortly. I am sorry I was not able to only give you positive opinions, but we must report back in an honest fashion, as we found the situation. I have brought back a year-book from the for you, and will be pleased to post it to you if you send us your full postal address.

Barevnerr from all 4 of us,