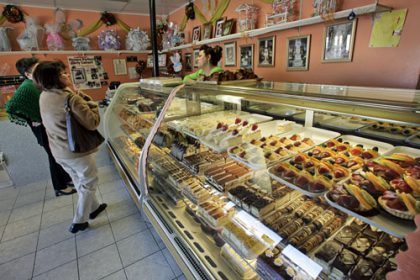 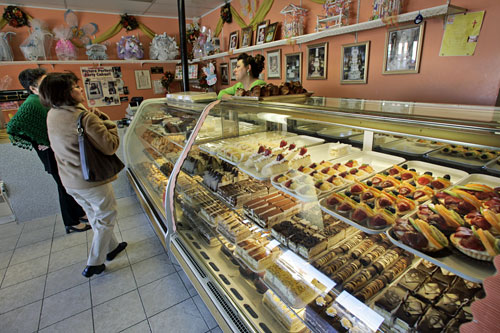 Even with 70-odd ian bakeries in the area, it's a challenge to get someone to share the recipe.

The other day, a co-worker brought in some mysterious cookies from an ian bakery, a little sheepish about having polished off about a third of them on the way.

They were tan domes with a tight spiral pattern on top, making them look a bit like snail shells lying on their sides. The pastry had a distinctive taste, more wholesome than cookie dough, followed by a little blast of richness from that spiral, which turned out to be a filling of sesame tahini. It tasted like peanut butter without peanut butter's funky edge.

In other words, these were cookies we could eat a lot of, and we proceeded to do so. But not before I saved one or two to explore their mystery.

When you cut one in half, the interior turned out to be curving lines of pastry alternating with darker caverns of sesame filling, vaguely like the pattern of layers in a halved onion.

Whatever it was, the pastry was definitely not cookie dough. I had to know what was going on here.

This plunged me into the vortex of the 70-odd ian bakeries in the area. Some were bread bakeries, but a lot were filled with case after case of French patisserie and syrup-soaked baklavas ? dangerous places to wander around in.

Only a couple of pastry shops made these tahini cookies. But how did this innocent cookie end up in these glittering palaces of seduction anyway?

It turned out that this “cookie” is considered to be a bread ? not a pastry ? because it's made with yeast-risen dough. It happens to be a clever variation on Middle Eastern tahini bread (in Arabic, khubz tahini; in ian, tahinov hats), which is usually made as a pita-size flatbread.

Some ian bakeries, such as Taron in east , make this big, flat variety, but Maral's Pastry in Van Nuys and Sarkis Pastry in make the dome-cookie version.

To us, it was no contest: The dome shape is better. It's a more convenient size and easier to eat, and the balance of flavors is better.

But we wanted to know: How do you make these irresistible treats?

The only recipe I could find was in an obscure cookbook published 25 years ago in , and it didn't give the exact result we wanted, even after tweaking it nine ways.

So I asked some ian bakers, but they were reluctant to give out their recipes. One told me, “You ask about my business, you ask too many questions, my friend.”

Uh-oh. I should have foreseen this ? it's a Middle Eastern tradition, as I already knew: When I traveled around in 1980, I naively asked bakers in every town from to about the local pastries, and their answers were always incomprehensible.

Finally, my driver took me aside and darkly told me, “Not even to their own sons, not till they're on their death beds, will they tell their secrets.”

Well, I understood. It's a bakery-eat-bakery world out there, and a pastry chef doesn't want to give up his edge. Still, that bread-cookie remained outside our grasp.

Finally, Hovsep Sarkozian of Maral's took pity on us and spelled it out. The secret seemed to be (as we should have known): This is a cross between a bread and a cookie, so it needs sugar and oil in the dough. Once it rises, you shape it and bake it right away without the sort of rests and additional rises that bread dough usually gets.

To tell the truth, even the versions that hadn't been exactly what we wanted ? the ones with loose spirals or dough that was too puffy or the ones that didn't brown up enough ? were quite good.

So finally the quest was over.

Not that I'm going to stop going to ian bakeries, mind you.

Man does not live by tahini bread alone.

Newer PostWe need to ask: Are we the real murderers?
Older PostThe Armenian Genocide And The Assyrian Factor