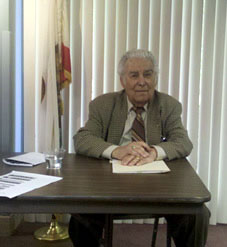 Jerusalem – It is a crying shame that a truly comprehensive and scholarly gratifying history of the annals of the Armenians of Jerusalem has yet to be penned.

Armenians have been living in Jerusalem continuously for over two thousand years, even before their conversion to Christianity.

That's a lot of history, by any reckoning.

Not that this demonstrably vital colony of artists, craftsmen, and other creative spirits – the list is endless but runs the whole gamut of human experience – lacks the necessary skill or expertise to do it, scattered though most of its members may be around the four corners of the world.

The reasons behind this omission are not mere inertia on the part of Armenian scribes. The lamentable fact is that the ancestors of Jerusalem's Armenians gave record-keeping a pedestrian glance, leaving their progeny with precious little reliable records or resources to tap.

And let us not forget that the whole Middle East region has been so enmeshed in periodic patches of political upheaval over the centuries, the foremost preoccupation of the city's Armenian denizens has always been to win the struggle for survival.

But all is not lost.

As we look through the glass of history, darkly, though we perceive dark clouds of unknowing, we can also sporadically discern some bright lights of promise, personified in a minuscule pride of historians, like Ormanian and Savalaniantz.

Their books have almost become objects of veneration, preserving for posterity as they do segments of the story of the Armenians of Jerusalem.

Several years ago, Jerusalem-born scholar Kevork Hintlian attempted to fill part of the gap in the history of his people with a well-researched, slim but titillating volume, “The History of the Armenians in the Holy Land.”

It is unfortunate that this book remains generally undervalued and unappreciated – it deserves better. Hintlian has been urged repeatedly to expand it, extend its range. Hopefully, he will get around to it sometime soon.

In sharp contrast to Hintlian's 80-page tome, US-based Haig Krikorian has just celebrated the culmination of a ten-year labor of love with a massive 800-page endeavor, entitled “Lives and Times of the Armenian Patriarchs of Jerusalem.”

Krikorian's book is a timely treasure, foraging into the profound, almost inaccessible niches and caves of disparate archives to encapsulate for perpetuity the vicissitudes of the Armenian church in Jerusalem.

The Armenian nation owns this patient plodder an incalculable debt of gratitude for rescuing from obscurity the epic tale of the panoply of Armenian church leaders, with a detailed chronicle that covers over a millennium and a half of the lives of the Armenian patriarchs of Jerusalem.

Krikorian has the good fortune of being a close friend of the current incumbent, Patriarch Torkom Manoogian, and that, coupled with his unflinching support for the Armenian Patriarchate, opened several doors for him and accorded him unprecedented access to existing records and private papers.

Despite the heavy lifting, I could not put the book down. Krikorian's fluid writing style, his meticulous choice of diction and paraphrase and the lack of any literary mannerism of ostentation makes reading his book a delight.

And there is plenty to tell his readers. Some of the facts he has uncovered have probably never been revealed before. How many Armenians are aware that Abraham (638-669), regarded by many as the first Armenian Patriarch of Jerusalem, had trekked all the way to Mecca, to plead with the Prophet Mohammed for protection for his flock?

[While it is almost impossible to determine the exact number of Armenian Patriarchs in Jerusalem, various sources place the number between 75 to 100].

Krikorian has taken great pains to trace the origins of the Armenian presence in the Holy Land, and in particular in Jerusalem, and as you read you come to realize that the story of the Armenians of Jerusalem is actually the story of their church, embodied in the Patriarchate of St James, with its grand cathedral, and that their history is linked inevitably to their entity as Christians.

While recapping his chronicle, with a great eye for detail, the writer also delves into the deeds and misdeeds of priestly members of the Brotherhood of St James, an interlude that no doubt is bound to raise eyebrows: not many Armenians will be happy to see the dirty wash of their spiritual leaders aired in public.

Krikorian is not interested in a whitewash. He emphasizes that the Armenian church survived the ravages of time despite the relentless threat of internal strife and corruption at the hands of unconscionable clergymen who pitted their ambitions ahead that of the good of the church.

Inevitably, there is the sorry episode of the 25 manuscripts purloined in the late 1940's and the battle to get them back. Not all 25 were retrieved. Three still remain unaccounted for, languishing perhaps in the safe of some millionaire collector. Whether he or she would know or appreciate half the value of so precious a possession, nobody will know.

Nor does Krikorian shy away from pointing the finger at the attempts by other Christian denominations, particularly the Greeks and Latins, to expropriate Armenian properties and subjugate the Armenian church.

At some point down the timeline of history, Armenians are said to have built over 500 monasteries in and around Jerusalem. Many of these have been lost now – either destroyed or taken over, either through wars or subterfuge, and sometimes by sheer chicanery or incompetence.

Ironically, while fellow Christians persecuted the Armenians, their non-Christian overlords, particularly the Moslems, seem to have viewed them with special favor, granting them rights and privileges they enjoy to this day. Krikorian points out that this was no doubt politically motivated, as a counter to their enemies with their Byzantine sympathies and loyalties.

Krikorian, a former student at the theological seminary of the Armenian Patriarchate of Jerusalem, takes us through a travelogue that spans the Byzantine, Arab, Crusader, Maneluke, Turk, British and Jordanian administrations, and down to the present era of the Israeli and Palestinian conflict.

Throughout this epoch, pockmarked by frequent violence and endemic corruption, the Armenians continued to survive and thrive, honing their skills at diplomatic and politician maneuvering, alongside the arts and crafts.

It is their presence that gives Jerusalem its unique flavor and contributes to the city's claim to be the center of the world.