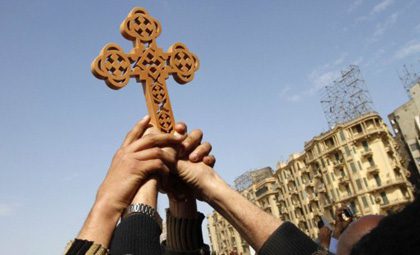 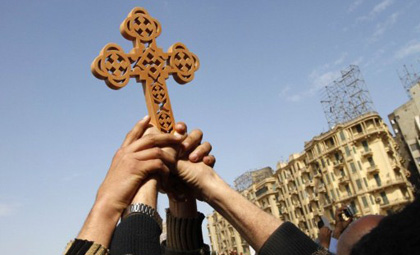 Just imagine this scenario: I am an EU citizen, Armenian by ethnicity, Christian by faith, and living in the UK. The country is going through turbulent and perhaps even violent times. There are popular revolts sweeping across many major towns and cities as men and women rise up against an authoritarian government that has ridden roughshod over their rights, freedoms and collective dignity and has been ruling them almost by diktat for long years.

As someone belonging to a small community?ethnically and also religiously?in the UK, I and my fellow Armenians have largely played the political game of cozying up to the government of the day by staying out of politics, supporting the establishment, uncritically endorsing its initiatives and pretty much keeping a low profile. We have clearly been aware of the grave injustices besetting society, but our religious and community leaders have nonetheless opted for the perceived wisdom of pragmatism over principle. In return, the government has left us alone to pursue our own rites and businesses.

But now, as many citizens are demonstrating against the power elites, the British army, police, intelligence services and unidentified agents are attacking those demonstrators by killing, maiming, arresting, detaining, mauling and muzzling some of them. The regime is being relentless in its pursuit of all demonstrators everywhere, as are the ordinary men and women relentless in their counter-demonstrations.

Do I and my community keep mum and hope that the storm stays in the teacup so we can avoid making hard choices? Do I support those entrenched in power in the hope that they succeed in quelling the demonstrations, and then we all revert to the status quo ante that had supposedly kept us safe? Or do I risk ?everything? by joining the masses against the cruel oppression and violence, even when we are unsure of the political designs and religious intentions of all those out in the streets challenging our politicians now corralled in London? Are we not caught between a rock and a hard place?

In some sense, it is very hard to make a choice: The unfortunate psychology of my upbringing as part of a small community would probably argue that I lie low and hope the demonstrations will die down. After all, do I really wish to risk my safety and my sparse ?privileges? by helping import the unpredictable vox populi into my neighborhood? But then, what about my principles? If I recall the Sermon on the Mount, when Jesus uttered to his followers his classical statement on Christian ethics, I must surely stand on the side of the poor, disenfranchised, gaoled, mourning and powerless members of society and help them reclaim their citizenship rights and dignities. Besides, faith and peacemaking matters aside, would I really wish to become a tyro and accept the tutelage of a government that no longer represents me but instead subjugates most of my inherent rights? I am in a pickle, aren?t I?

Thankfully, I do not face this quandary since there are checks and balances?political and juridical?within the EU today that would safeguard my individual rights in a comparably peaceful society. Moreover, no religious leader any longer possesses the political sway to hinder the process of human emancipation the way Cardinal Richelieu, for instance, did during the French Revolution or Prince John exercised pitilessly during the Middle Ages in England.

But alas, this is still occurring in the MENA region today. Whether in Iraq, Israel and Palestine, Egypt, or Syria and Lebanon (with its own confessional setting), Christians who were once the bellwethers of healthy Middle Eastern societies are feeling exposed, menaced and insecure. Their churches are being burned down, relatives or friends are at times being killed, beaten up or abducted, voices are being snuffed out, job opportunities are being denied them, and they are almost facing a dhimmitude that had become defunct with the collapse of the Ottoman Empire. No wonder their numbers are dwindling as some of them feel that their choices lie simply between putting up with fearful discrimination and emigrating elsewhere.

But they are the relatives of Christian Arabs from the region who once fought hand-in-glove with Muslim Arabs against the Turks, against Western colonialism and, more recently, against Israeli expansionism. They are full and equal members of Arab societies, and those who would wish to see them leave or die are not only practicing dubious ideologies that are divinely uninspired but are also patently irreligious and solely interested in procreating serfdom.

So what about a MENA region pockmarked with popular revolts? For a majority of indigenous Christians, the ideal model of governance remains one of citizenship rights within a democratic, secular and plural society. However, they also dread?based on experience?the thought of those ongoing uprisings establishing a majority rule that becomes even more restrictive and handcuffs their rights even further. That might well happen, but Christians should also stand up for their rights rather than seek their shells or hide under the whooshing pantaloons of those rulers who supposedly protect them against worse fates. After all, what will happen when any of those regimes fall?tomorrow, next year, in a decade? Or conversely, how will they react when the same despots decide to scapegoat them simply to ensure their own survival?

True, my British case is a virtual one. In the MENA region, however, freedom could overtake fear, since what applies to an Orthodox in Egypt, a Chaldean in Iraq or an Anglican in Lebanon would also apply mutatis mutandis to a Shia in Bahrain, a Druze in Syria or a Baha?i in Iran. After all, was it not Dietrich Bonheoffer who admonished us in his Letters and Papers from Prison that action comes not from thought but from a readiness for responsibility?

1st Pan-Armenian conference – getting past the patriotic rhetoric