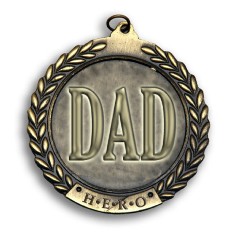 Every time I hear the song “Oh My Papa” on the radio, or on a CD or tape, it brings tears to my eyes. The recording by Eddie Fisher is my favorite. Yes, grown men do cry. You never realize how important people are in your life until they're gone. I want to dedicate this article to all the fathers and grandfathers for their advice, guidance and patience in helping me to manhood.

When you're a young lad, yo do everything that you're told by your father on any matter. In your eyes, he's wise, good and usually has an answer to all of your questions. Can you remember having conversations with some of your buddies bragging about your father to the point of fisticuffs? My dad knows more than your dad, or he can make many things out of wood, is a great mechanic, etc.

The story I'm going to tell you, will give you an idea of a boy, born, first generation of immigrant parents and his growth to manhood. I've kept this inside of me all these years and decided to let you know how fortunate I was to have such a loving and caring father. I'm sure that many of you also can relate to this story.

My father was born in a small village in Armenia not far from Mt. Ararat. His family had a small farm. They raised chickens, had a milk cow, grew wheat and corn, and his pet was a water buffalo. Then his whole world came to an end at age 15. One day while working in the fields stacking hay not far from his home, a band of Ottoman Turks rode in on their horses, surrounded the house, killed his father and mother, kidnapped his twin sister, set the house on fire, took whatever valuables they could carry and livestock. The Turkish Regime at that time was trying to annihilate the Armenian Race. Over one and a half million Armenians, Rumanians and other races were in their plans. It's all in the history books and the Turks still deny that this ever happened.

Picture yourself in this situation. What would you do? My father had an uncle who lived in Constantinople which was many miles away. For his safety, he traveled by night and slept in the fields during the day or in a barn of a good Samaritan doing odd jobs for food on his long journey. He found his uncle and was welcomed with open arms. He worked in his import/export shop for several years to earn enough money to emigrate to America.

He entered into this country through Ellis Island in 1916 and got a job as an apprentice in a wood working shop. He was drafted into the Army in 1918 when America entered into World War I, and upon his discharge from the Army, became an American citizen immediately.

He married my mother who lived on an adjacent farm in Armenia. Theirs was a contract marriage, and even though he was 16 years older than my mother, AND their marriage lasted for 59 years. They had three children and for years, many thought that my mother was my sister. (The oldest son was promised in marriage to the oldest daughter. Remember “Fiddler on the Roof” movie and the Match Maker?)

My father only had a fifth grade education, but the wisdom of a scholar. He taught me how to use my hands to make things, the wonderful weekend fishing trips on the Mississippi River, he taught me how to cook and run a restaurant, how to take a coal furnace apart to repair (mother was furious from all the coal dust everywhere), getting on top of our two story Dutch Colonial house to replace damaged roofing shingles, and one thing that I remember the most was his statement, “There is good in all human beings, even your enemies. Wisdom domes from being a good listener, evaluate what you hear, and speak only if you have something to say that makes common sense.”

The only time I saw tears in my father's eyes was when he spoke about the death of his parents and when he said goodbye to me when I left for basic training at Fort Leonardwood, Mo., during World War II. He wrote only a few letters while I was overseas during the African/European campaigns but I read and reread them many times. I still have those letters in a safe deposit box that I will pass on to my son.

Remember, when you leave the nest, you still have a father and a friend, and don't you ever forget that. They appreciate phone calls to let them know you love him. Make sure the grandchildren see him as often as possible, for grandfathers also play an important role in a boy's life.

We celebrate “Father's Day” once a year, but in reality it should be every day of the year. I love you dad.