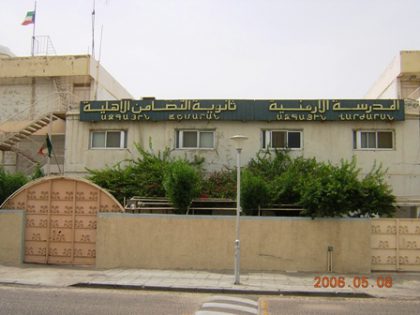 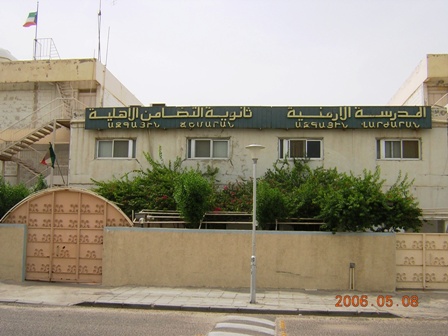 The below article was written by David Zenian who visited Kuwait and United Arab Emirates in 1993. His comments have served as the basis for several articles about the Armenian community in Kuwait in online sources including Wikipedia.?

KUWAIT ? Civil strife and political unrest often have devastating effects on Armenian communities in the Middle East, and Kuwait was about to become its latest casualty if not for Operation Desert Storm which liberated the oil-rich state from Iraqi occupation.

But the memory of war lingers on. Father Barouyr Sarkissian(1), the long-time pastor of the local Armenian church, still keeps extra food, fuel and a small generator at home more than three years after the invasion ? just in case something goes wrong again.

?Kuwait is not the same, and probably the Armenian community here will not be the same again too,? Father Sarkissian says reminiscing about the ?good old days? of the mid-1980?s when nearly 12,000 Armenians lived in Kuwait.

The same it may not be again, but the Armenian community in Kuwait is slowly getting back on track. Among the encouraging signs are generally relaxed employment laws regarding newcomers from such Arab states as Syria ? the birthplace of the majority of Armenians who have made Kuwait their second home. At last count in early January 1994, an estimated 500 ?single Armenian men? had found employment with various companies in Kuwait in the past 12 months alone.

?Hopefully, these people will settle down, and eventually get married and bring their new brides to Kuwait. This was how the community started in the late 1950?s and maybe the same will happen again,? Father Sarkissian said.

Meanwhile, enrollment at the Armenian school is rising as families join the heads of their households after a few years away from Kuwait.

?We are lucky,? Father Sarkissian says. ?We were down to a mere 500 Armenians during the Iraqi occupation of Kuwait in 1990. After the liberation, we opened our school with only 90 students. Today the Armenian community numbers about 2,500 ? and slowly growing. The Armenian school this year has 298 students.? Father Sarkissian was one of the 500 who stayed behind to look after those who could not leave and to take care of community property.

When the first Iraqi tanks rolled into Kuwait city in August 1990, the majority of Armenian families were away vacationing in their native Syria or Lebanon. ?Thank God it all started in the middle of summer. The school was closed and the children safe. Maybe only a few thousand Armenians were in Kuwait, and most of them were working men. With the occupation in place, most of them left by road to Baghdad and then on to their home countries,? Father Sarkissian added.

While stores, warehouses, factories and other facilities were ?loaded up in trucks and carted off to Iraq by the invading army?, the Armenian school and church were unscathed. ?A dozen or so Armenian youths maintained a round the clock vigil in both of these institutions to keep the looters away. They were not armed except with our prayers,? he said. ?We have invested so much into what we have as a community, and we just could not let go.?

Armenians ?discovered Kuwait? immediately after the first wave of Arab nationalism hit Syria and Egypt with the formation in 1958 of the ill-fated United Arab Republic, the brainchild of the late Egyptian President Gamal Abdel Nasser.

The UAR, as it was known, brought wide scale nationalization and compulsory military service ? measures which did not sit well with the large Armenian communities in Syria and Egypt. The establishment of the UAR also triggered a mass exodus of Armenians to Lebanon from Syria and to Canada and the United States from Egypt.

Few made it to Kuwait, which was then nothing but a desert British mandate about the size of New Jersey. There, they discovered the taste of wealth, and with their home countries in turmoil, dropped anchor despite the harsh living conditions. They knew that foreigners were nothing but glorified migrant workers whose residence permits depended on the goodwill of their Kuwaiti sponsors. But that was immaterial.

Within a few years, more young Armenians flocked into Kuwait. They were mainly skilled craftsmen who soon cut a lucrative niche for themselves in Kuwait?s thriving light industry, auto repair, auto body, plumbing, electrical and service sector. ?In no time at all, auto repair in Kuwait was synonymous to Armenian. All the good mechanics were Armenians,? a long-time Armenian resident of Kuwait city said.

With each influx of young Armenians, new brides followed. This meant children, and the need for an Armenian education and a place of worship. ?You cannot deprive the Armenians from church and school. Have a look at all the Armenian communities in the world. You get a couple of hundred Armenians together, and the first thing they do is start a school and get a priest to conduct Sunday Mass,? Father Sarkisian said.

It was only a few years after the first wave of Armenians arrived in Kuwait that a small group got together and started the Armenian school. ?The community was primarily composed of newlyweds, and once their kids got to the age of four or five, these people opened a kindergarten. That was in 1960. I came to Kuwait in 1961, and in the years that followed both our school and church grew into full-fledged and self-sustaining institutions,? Father Sarkissian said.

?We used to hold Mass in an apartment, then one year we pitched a tent in the courtyard of the Armenian school to commemorate St. Vartan. We have come a long way since then,? Father Sarkissian says.

More classes were added to the school every year to accommodate the growing population, and today, there is room for Armenian children from kindergarten to 12 grade. The school, the only foreign institution which is allowed to incorporate religion into its curriculum(2), now has nearly 300 students, and a staff of 25 full time teachers, including 17 Armenians.

That?s a far cry from the days when enrollment topped 700, and the community was more than 12,000-strong.

But automatic transmission repair shop owner Hagop Kouyoumjian is optimistic. ?Armenians have a great reputation in Kuwait, and I am confident we will once again prosper and grow. There are opportunities in Kuwait, and we will make good use of that,? he said.

(1) Father Barouyr Sarkissian (now deceased) was originally from Lebanon. He served the community for many decades as parish pastor and teacher of “religion” in the Armenian School. The prelacy library in Salmiya is named after him. His children and especially Keri Sarkissian are active members of the community.?

(2) Armenian language, history and religion are the three subjects taught in Armenian in the school.

Please contact us if you have additional information on the above subject.