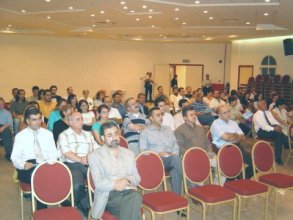 The Council of the Armenian Community in the Northern Emirates (Sharjah, Dubai, etc.) celebrated the Independence Day of Armenia this year by inviting Canadian-Armenian Silva Tcharshafian (expert on International Relations and Political Sciences, based in Armenia), who delivered a lecture on 22nd September 2004, 8:30 p.m., at the Armenian Community Hall in Sharjah.

As usual there was about half an hour delay before all taking seats. Ara Keusseyan, Chairman of the Council made the opening speech, referring briefly to the life and achievements of the lecturer. Tamar Apelian performed a song, accompanied on piano by Juli Bekarian. Rita Demirjian performed a traditional dance.

Silva Tcharshafian said in her lecture that gaining independence is important, but it is far more significant to protect this independence and convert it to a useful tool in the development process of the country. She underlined that the present political situation in is not stable, the economy lacks behind the expectations of the citizens and, generally speaking, a state of conflict exists with two or even three neighboring countries. She provided the audience with her view about adopting economic measures that will enable to reposition herself on the path of progress.