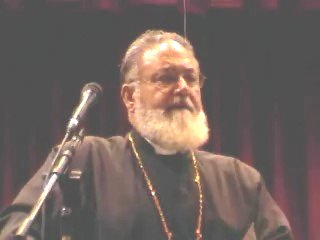 AZAD-HYE (08 October 2004): Father Mesrob Kerkezian, Pastor of the Saint Hagop Armenian Apostolic Church in Eshrefiah () has been in private visit to the UAE. Taking the opportunity, the Council of the Armenian Community of the Northern Emirates invited him to deliver a lecture on Wednesday 29th September 2004, at the Community Hall in Sharjah.

Father Aram Dayermenjian, Pastor of the UAE Armenians made the opening speech presenting a short biography of the guest, who has been involved in religious and educational service for more than thirty years.

Father Kerkezian stressed in his lecture the need for the Armenian youth to know more about the traditions and the feasts of the Church and be directly involved in national-religious life. He noted that in many places of the world, ordinary people know so much about religion and care to a large extent for their spiritual life. We ought to reach to that point, especially that we are the first nation on earth that established Christianity as a state religion (in the fourth century), he reminded.

The Catholicosate of Cilicia has announced 2004 as Armenian Family Year. We need to stress the values of family life, said Father Kerkezian. Even the smallest things have the ability to create life long impressions. For example, the President of Lebanon Emile Lahoud (being a child of an Armenian mother), remembers that when he was very young, his mother used to take him every Sunday to Saint Nshan Armenian Church in Beirut, a tradition that has been vividly kept in his memory, but unfortunately not many families abide with it now. Sunday is considered for many as a day of rest, of purchasing personal hobbies and meeting friends or relatives.

Answering to a question about the long duration of the Armenian Holy Mass ritual (which usually lasts two hours), Father Kerkezian said that the tradition cannot be altered and the Holy Mass (known as “Badarak”) should use the same old Armenian language (“Krapar”). However he mentioned that believers are not obliged to attend the whole ceremony. The Church is open to everybody at any time and there are no time restrictions. All they have to do is to follow the ceremony respectfully and not to disturb the worshipers. The degree of faith matters, not the length of a pray. The old language should be kept as part of our centuries long tradition, since Badarak in itself is a one integral ceremony. Moreover, our old language is not so strange or peculiar to the ears of the native listener. It is widely understood; translated texts are provided on spot. Many rituals (except of the Holy Mass) are already officiated in the modern language.