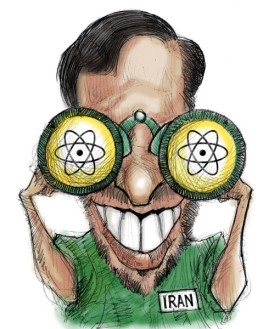 By Joseph A. Kechichian*
Special to Gulf News

Vartan Gregorian, the erudite president of the Carnegie Corporation of New York, a grant-making institution founded by Andrew Carnegie in 1911, penned a thoughtful 12-page draft model letter for US President Barack Obama to consider sending to both the Supreme Leader of Iran as well as its President Mahmoud Ahmadinejad.

It is an exceptional document that contextualises key issues regarding Iran's quest for nuclear capabilities.

Gregorian, a Tabriz-born Armenian-American historian with a stellar academic record, is the author of several books, including the acclaimed Islam: A Mosaic, Not A Monolith. True to his style, the draft letter is well thought-out, and rich in detail.

It opens with a long overdue recognition that “Americans are deeply mindful and respectful of the renowned achievements and rich cultural legacy of Iranian civilisation, which reflect an unparalleled degree of historical continuity”.

It then identifies three epochal contributions which etched the Iranian character ever since. With Zoroastrianism, Gregorian summarises, Iranians “affirmed man's absolute free will to choose between evil and a Divine Creator, and our common destiny to face a final Day of Judgment”.

This is a fundamental building foundation for later analysis but oh so valuable in and of itself.

At a later stage, the academic highlights how under the Achaemenid Empire, enlightened leaders like Cyrus and Darius defined tolerance and pluralism.

“It was Cyrus the Great who decreed that 'all should be free to worship their gods without impediments or persecution' – a proclamation unique, not only for its time, but for centuries to come”, acknowledges the author. Few outsiders appreciate the value such ideas have in molding Iranian perceptions.

With the advent of Islam, Gregorian underscores, “Iranians, drawing on their own early beliefs, helped to develop and then adhered to Shiite Islam.”

He continues: “It was during this period that Iran became the seat of Islamic learning and gave to the world its science, philosophy, theology, arts, and architecture.”

Because such an expose was seldom made public in the post-1979 US-Iranian environment, the tone of the letter sets the stage for significant policy differences. In fact, with this putative Obama letter, Gregorian wants the US to answer President Ahmadinajed's far-ranging, 18-page March 2006 dispatch to former US president George W. Bush, which was cavalierly ignored.

It may be worth recalling that the Iranian focused on major religious values, history, and international relations in his correspondence, and was deeply disappointed that his initiative was brushed aside.

Prodded by pro-Israeli forces that wished to launch pre-emptive attacks against Iran, Bush disregarded the Ahmadinejad memo, as Washington pigeonholed Iran into his infamous 'axis of evil' categorisation. To his credit, Gregorian touches upon past mistakes, invokes American understanding, and reminds Iranians that the US came under new management on 20 January 2009.

Iranians and Americans “enjoyed remarkably positive relations”, he writes, because “the US [always] defended [the country's] territorial integrity”. Gregorian stresses that were it “not for America's efforts, Iran might have been broken up” and, in frank statements, concedes that Washington “promoted the shah's ambitions to make Iran a regional superpower”.

He then places a few choice words in Obama's mouth that will shock: the US “did not recognise that a nationalist, secular, and democratic Iran would have been a great counterforce against communism,” concluding: “We were wrong.”

This is a polite way of saying that Washington was mistaken to help organise the 1953 coup against former Iranian prime minister Mohammad Mossadeq.

Although a slew of painful policies followed, including the 444-day hostage ordeal as well as the failed April 24, 1980, rescue mission that cost eight American servicemen their lives, the letter acknowledges that today Washington continues to have grave concerns about Iran's nuclear programmes.

Yet, even on this front, the author clarifies how Washington assisted Tehran – as early as 1957 – to acquire nuclear power through the Atoms for Peace programme. In 1975, then secretary of state Henry Kissinger signed a National Security Memorandum, which affirmed that the “introduction of nuclear power will both provide for the growing needs of Iran's economy and free remaining oil reserves for export or conversion to petrochemicals”.

The letter reminds Iran's Supreme Leader Ayatollah Khamenei and Ahmadinejad that it was Ayatollah Ruhollah Khomeini, who called nuclear power 'the work of the devil', although doubts remained as to whether current efforts are strictly for peaceful purposes. According to the putative letter, Washington offers to “discuss [Iran's] legitimate aspirations as a regional power and to cease all talk of 'regime change'.”

In short, everything would be done to discourage Tehran from acquiring nuclear weapons, ostensibly to prevent a regional arms race.

While the letter closes with wishes for improved relations and a direct quote from Imam Ali calling for tolerance, mercy, and compassion, it does not include any references to Israel's nuclear weapons, or to Iranian fears of a potential assault on its nuclear facilities.

Consequently, and even if Ahmadinejad fails to win another presidential term on June 12, Khamenei is not likely to sacrifice this critical national security initiative. For precisely the reasons Gregorian enunciates, Iran will become a nuclear power, sooner rather than later.

*Dr. Joseph A. Kechichian is a commentator and author of several books on Gulf affairs.