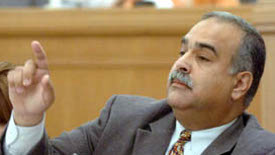 In Washington, Brussels, Moscow and elsewhere, Turkish President Abdullah Gul, Prime Minister Erdogan, Foreign Minister Davutoglu and others  have long advocated combining onto one political agenda their country?s normalization of relations with Armenia and the resolution of Mountainous Karabagh?s conflict with Azerbaijan.

Newly-independent Armenia?s ostensibly mature policy –  which I supported as the nation?s first foreign affairs minister – of seeking establishment of diplomatic relations without the positing of any preconditions can today, 18 years into the game, be pronounced dead on arrival.

Oddly but expectedly, it has been the senior government at Ankara which, instead of finally recognizing the responsibility of its Ottoman-Young Turk predecessors for the great genocide and national dispossession of 1915 or at minimum employing the facility of an unconditional official relationship to address and solve the outstanding issues that resulted from it, has ab initio proffered a variety of unilateral conditions.  The staple prerequisites of a) removing genocide and its affirmation from Armenia?s international vocabulary and b) validating the de facto Turkish-Armenian frontier which had been imposed by Bolshevik-Kemalist fiat in 1921, have since been supplemented by c) a Baku-centric regulation of  Armenian-Azerbaijani relations and of Mountainous Karabagh?s legitimate quest for liberty, post-Stalinist decolonization and sovereign statehood.

The bilateral power asymmetry of the past has been conjoined with a contemporary asymmetry in diplomatic demeanor, which is underscored by Turkey?s continued bad-neighborly blockade.  This makes it finally impossible to bridge the Turkish-Armenian divide by old and outdated technologies.

Turkey is right on this score.  And so, for the first time in all history, bring it all out and onto the table and let?s hammer out a comprehensive blueprint that delivers us to a brave new future of peace, prosperity and shared security for the parties and for the broader region.

This daring paradigm, which will entail the constructive support of the world of nations, must give solution and closure to a few pivotal points on the agenda:

1) In order to realize its ambition of becoming an area leader of democratic repute, Turkey must face the cardinal sin in its memory closet, surmount decades of denialism and, in the prime but sadly unique example of postwar Germany, chart its own dev yol to recognition and remorse, redemption and restitution.  These can materialize by repealing racist laws; paying honest tribute and bringing truth to education; conducting a complete inventory of, and then restoring, the vast cultural heritage in present-day eastern Turkey and celebrating its Armenian identity; launching and carrying through a homecoming initiative to guarantee the right of voluntary return to the Armenian heartland for the progeny of genocide survivors and the dispossessed.

2) It is imperative to determine and delimit the boundaries between the Republics of Turkey and Armenia: Are they the de jure borders as defined and awarded under Woodrow Wilson?s presidential seal in November 1920, or the ones that obtained de facto as part of the Russo-Turkish compact of 1921 which usurped the lion?s share of the ancestral Armenian patrimony?  What is the legal status of the historic homelands currently under Turkish occupation, and does Armenia have a right to sovereign access to the sea?  To these ends, and absent the parties? diplomatic good-faith in answering these questions, likely telling of their positions and preoccupations would be their acceptance of the compulsory jurisdiction of the International Court of Justice.

3) The same goes for Mountainous Karabagh and Armenian-Azerbaijani relations.  We live in a world in which the rule of interests often trumps the rule of law, where most Western nations have overcome standard fixations on the principle of territorial integrity to recognize Kosovo, just as the Russian Federation and a couple of others have done the same for Abkhazia.  Under international law, the Montevideo Convention and the Soviet legislation controlling at the time of Karabagh?s referendum on independence, the juridical underpinnings of its sovereignty are as strong as, if not more solid than, the aforementioned examples.  Kosovo?s ?sui generis? argument uses a fancy label that betrays a false distinction without a true difference.  All the countries that recognized either Kosovo or Abkhazia, if the rule of laws and rights is important to them, must move immediately to recognize the Republic of Mountainous Karabagh within its constitutional borders.  Armenia and Turkey should lead the way.

4) As for the polemical scoring point of ?occupied? territories and the return of refugees, the case is closed on these consequences of Azerbaijan?s failed war of aggression against Karabagh.  And it will remain closed until and unless a) Turkey releases from occupation the Armenian provinces currently under its control and allows for the descendants? exercise of the right of return to their national home; and b) Azerbaijan lifts its occupation of the Armenian territories of Shahumian, Getashen and Nakhichevan, pays for the brutal and documented destruction in December 2005 of the Armenian cultural wonder called Jugha, provides a right of return and compensation  to the 400,000 Armenian refugees from Mountainous Karabagh and Azerbaijan, recognizes Karabagh and then enters into formal negotiations with it to finalize issues of border adjustment and delineation, trade and communications, peace and public safety.

These are but a few of the priority items that need be included in the agenda of ?linkage? that official Ankara has long promoted.  If its insistence is anything more than partisan puff or an escape hatch from political accountability, then the time is ripe for laying everything on the line, presenting in civil fashion the pre- and post-conditions of choice, and deciding which matters can be tackled diplomatically and which require recourse to the tribunals of law.  This process alone, without prejudice to its results, just might take the parties and their partnership to the hope of unprecedented normalization and the promise of a long-awaited reconciliation between their peoples.

For policymaker and pundit alike, the road to regional integration in a new-age community of democratic values and global security, to the Caucasus, Central Asia and Afghanistan, to energy sourcing and other strategic priorities passes right through the long-irrelevant but now-tectonic killing fields of old Armenia.  If the future is meant to  count, no measure of NATO membership or geopolitical self-importance or moderate-Islam grandstanding can prevent the ultimate harmony of renaissance and realpolitik.