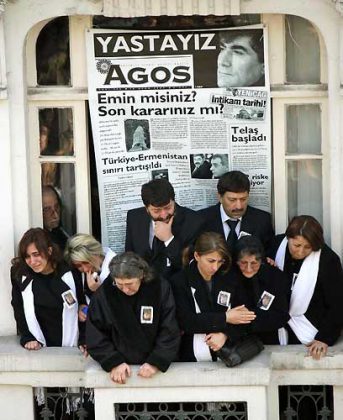 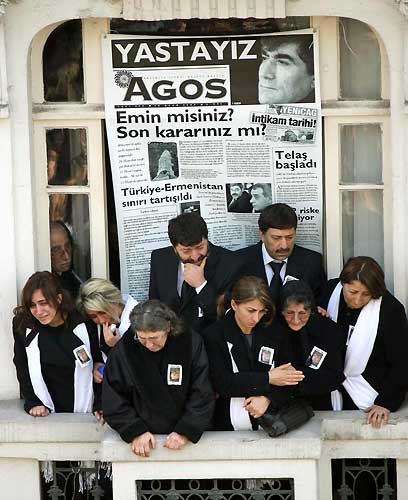 By Rayyan al-Shawaf
?
Less than a week before Turkish-Armenian journalist Hrant Dink was assassinated his compatriot Orhan Pamuk winner of the 2006 Nobel Prize in Literature was made editor-in-chief for a day at Radikal a small but influential newspaper. In a front-page article Pamuk drew attention to the throngs of security personnel needed to ensure that Greek Orthodox religious ceremonies considered provocative by Turkish ultra-nationalists passed without incident. The lead article however discussed the persecution of writers and intellectuals in Turkey. Pamuk focused on Nazim Hikmet (1902-1963) Turkey's poet laureate who was vilified in the press for his communist convictions and spent his last years in exile.
?
It is ironic that the assassination of Dink should have come so close on the heels of Pamuk's lament as though to confirm the continued vulnerability of Turkish writers. Yet the outpouring of grief and condemnation by Turks of virtually all political stripes signaled a major shift in the public's perception of free speech. This political maturation may lead to pressure on the state to further enshrine intellectual freedoms.
?
Many of the reforms Turkey has recently pushed through have admittedly come at the behest of the European Union which is using its leverage with membership-hungry Turkey to spur democratic change. Yet Turkish intellectuals have played a leading role in challenging taboos. And though much of this activism has traditionally emanated from the political left even this trend may be changing. After all the ruling Justice and Development Party – which has accelerated Turkey's reform drive – is conservative in orientation. Many of its prominent members – including Prime Minister Recep Tayyip Erdogan – have roots in political Islam. The right itself whether nationalist or Islamist is not monolithic. Alongside the mainstream media's condemnation of Dink's assassination the headline of the Islamist newspaper Yeni Safak read: “Our Hrant is Murdered.” Make no mistake: Political culture in Turkey is changing.
?
This has been a long time coming. Over half a century ago Hikmet made a moving – albeit brief – reference to the slaughter of Armenians in his poem “Evening Stroll.” World-renowned Turkish novelist Yasar Kemal who is of Kurdish origin repeatedly condemned his country's treatment of its Kurdish minority and was jailed on several occasions. Beginning in 1977 Ragip Zarakolu and his wife Ayse Nur Zarakolu who died in 2002 used their Belge Publishing House to release trailblazing works dealing with minorities in Turkey. And in 2005 Pamuk condemned the silence regarding treatment of Armenians and Kurds.
?
Dink himself openly called the massacres of Armenians in 1915-1918 a genocide something unthinkable in the 1980s and 1990s when the Armenian question didn't exist in Turkey. Indeed in those days it was considered treasonous to take a stand for Kurdish rights a position which has since become commonplace. Parliamentarian Leyla Zana spent 1994-2004 in jail in part for having addressed the Turkish Parliament in Kurdish. Laws restricting communication in Kurdish and other languages were softened in 2002.
?
In recent years a number of Turkish academics have addressed the Armenian tragedy exposing painful truths and urging their compatriots to acknowledge the suffering of the Armenians. Many of these scholars were involved in a landmark event in 2005 the ramifications of which continue to reverberate in Turkey.
?
It was in September 2005 at Istanbul's Bilgi University that a twice-delayed conference dedicated to discussing “Ottoman Armenians during the decline of the Empire” was finally convened. The conference which brought together Turkish academics from around the world represented the first “official” attempt by a Turkish body to deal with the Armenian question. Claims of genocide were openly discussed. No outstanding issues were resolved but the “final taboo” had been broken.
?
The Turkish government eager to emphasize its belief in free intellectual inquiry gave its full support to the idea of the symposium. When ultra-nationalist pressure threatened to scuttle the conference Erdogan intervened to guarantee that it take place.
?
There was opposition to the event yet much had happened to stoke public curiosity in Armenian issues. In 2004 a Turkish-language book with the bland title “My Grandmother” appeared on bookshelves. It would spark widespread interest in a long-suppressed facet of Turkish history: the conversion of thousands of Armenians to Islam in the waning days of the Ottoman Empire as a means of escaping persecution. The author Fethiye Cetin related how her grandmother was adopted and raised by a Turkish Muslim family after her kin had been killed. Thanks to the book acknowledgment by many Turks of their Armenian heritage started to become acceptable. Fittingly Cetin a lawyer by trade served as Dink's counsel in his constant battles with the judiciary which prosecuted him for “insulting Turkishness.”
?
Reformist intellectuals have long agonized over how to confront this issue of Turkishness. Acclaimed British novelist Moris Farhi who is of Turkish-Jewish origin has one of his characters make the following claim in his novel “Young Turk” of 2004: “True Turkishness means rejoicing in the infinite plurality of people as we rejoice in the infinite multiplicity of nature!” Then not without irony the same character pursues this line of thought to its logical conclusion: “It means rejecting all the 'isms' and 'nesses' – including Turkishness.”
?
Will Turkey succeed in disentangling ethnicity from Turkishness? Can Turkishness become inclusive enough to embrace groups – like Kurds Armenians and others – that are not ethnically Turkish? If so this will likely remove one of the last major impediments to a thorough reappraisal of Turkish history. For if ethnic nationalism ceases to be the ideological glue of the country recognizing the history of non-Turkish groups will no longer be perceived as threatening to national unity. Perhaps then Turkey can fully integrate people who have for centuries constituted a part of Ottoman and now Turkish society.
?
Rayyan al-Shawaf is a freelance writer and reviewer based in Beirut. He wrote this commentary for THE DAILY STAR.
?
Source: “The Daily Star” Beirut 26 January 2007
?
Photo: Hrant Dink mourners at the balcony of AGOS Armenian daily of Istanbul 23 January 2007

Newer PostHrant Dink: Victim of deadly denialism
Older PostThree realities we, as citizens of Turkey, must urgently come to terms with