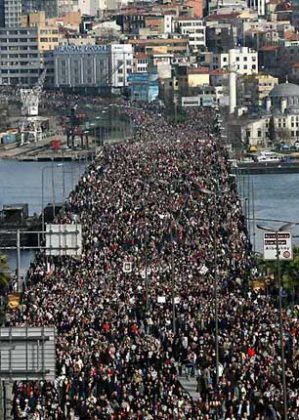 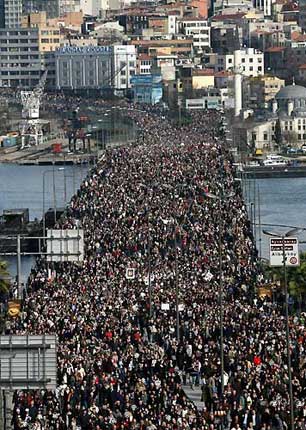 After shooting Hrant Dink in the back

We shot Hrant Dink in the back just in front of his newspaper. Not with one bullet, with exactly three bullets. If we shamelessly directed the gun to his face, to his heart, we would not be able to shoot Hrant anyways, our eyes would be dazzled. His soul that has been living in the ?unease of a pigeon? for some while, his tormented consciousness that has been under the siege of our Law of Treason No:301 finally found peace perhaps for the first time on our lands that he loved to death. He was just 53 when we shot him in the back and released him from the Prison of Turkishness on 19 January 2007. While Hrant was slowly rising to heavens in his black body bag, finally having found a space in the darkness of which his Armenian difference did not matter, the folk song, ?Bride in the Yellow? (Sari Gelin for Turks, Sari Gyalin for Armenians) was playing at a party convention of the ruling Islamist party AKP in tribute to him. The song, that has long been popular across the Caucasus region and a cultural site of contestation among the Armenians and Turks, is about the tragic love of Sari Gelin. Its protagonist, a bride living in the rugged mountains separated from her lover, symbolizes love, death and fate. What could be a better song of tribute for the Armenian Antigone of Turkey?

With Sari Gelin / Sari Gyalin tunes rising from our nation where the Armenians have long been the superfluous minority, those who govern us composed equally tragic lyrics one after another on Dink?s assassination: ?This attack on Hrant Dink was in fact an attack on all of us, on our unity and integrity as a nation, on our peace and stability.? ?This is a perfidious, insidious, an intentional attack that aims to annihilate Turkey?s happiness.? ?Who was shot was not only Hrant Dink, it was at the same time Turkey?s reputation.? ? The attack has an agenda geared towards our domestic politics. The goal is to install feelings of guilt in our collective unconscious.? The real victim was not Hrant Dink, it was us, as usual: Our peace, our stability, our happiness, our unity, our integrity, our conscience that has long forgotten disturbance and shame. It was us who was shot yesterday, not Dink whose thoughts and opinions, whose entire consciousness and existence was put under ban with our Law of Treason, the catastrophic brainchild of our own existential fears and foundational traumas.

On the one hand an epidemic of paranoia infected our airwaves, on the other hand we got drowned in the words of endearment dedicated to Hrant Dink. A society and its intellectuals along with their ruling elites – who could not stand the possibility that Sabiha Gokcen could be an Armenian, who did not feel outraged when an Interior Minister called Abdullah Ocalan ?an Armenian bastard?, we, who settled for a mere spectatorship while Hrant Dink was languishing in the dark and smoky corridors in the courts of justice [sic] and metamorphosing into a human target of harassment and hatred, we all became ?Armenians?, we all became ?Hrant Dinks?, suddenly. Our streets were blocked off of love, fellowship, and the fraternity of peoples. With no doubt we meant well, many of us no doubt were angry and heart-broken. But in the ocean of our suffering and rage that assumed a deceitful oneness and resembled real human solidarity for several hours in the streets of our highly divided society as thousands rallied in Istanbul in protest of this heinous murder, lies with truths, victims with victimizers, patriotism with racism, politics of pity with human solidarity, bytes of official history with narratives of Anatolian memories, feelings of guilt with national pride became all entangled and exploded as a massive tear gas bomb at the center of the nation.

Those of us who can open their eyes in this smoke and mayhem now, those citizens of Turkey who truly love Turkey, are obliged to come to terms with three realities as soon as possible:

First of all, who was shot yesterday was neither our integrity, nor our national unity, nor our international reputation. Who was shot yesterday was an Armenian citizen of Turkey  whose life we took in the age of 53 by shooting him in the back. He was shot because he was an Armenian. The reason for his murder was that he was succeeding in helping us see the reality of 1915, that he had not lost his love and respect for the people of Turkey despite the vices and injustices he was enduring among us. Who we shot in the back was a citizen of Turkey who had boldly protested against the French Bill on the Armenian Genocide several months ago*, who had refused to ?shoot us in the back? and collaborate with imperial powers who do target our peace, our stability, our fledgling democracy in times of our political turmoil. He was shot because he genuinely believed that Turkish people, the children of Anatolia, had the wisdom to come to terms with 1915 on their own.

Second, neither acts of compassion (the ?noblest form of passion,? according to Arendt), nor the very same lies that we have been telling ourselves since the foundation of our Republic will help us establish democracy and freedom in our country. Indeed, the history of nation-states is fraught with examples that illustrate how easily ?conflicts of the soul?, ocean-like emotions carried into politics can turn into murderous episodes. We need to bring reason back to our politics. We need to re-think which forms of institutions will sustain an enduring democracy for our Anatolian ethnic mosaic still dramatically oscillating between the eastern and the western values. Young democracies as ethnically diverse as ours can survive episodes of political turmoil neither with lullabies of humanism murmuring ?good intentions? nor with gospels of love on the essential goodness of human beings or the natural goodness of a people. They can only survive in a political order where the rules of law have a duty to protect the norms of constitutional citizenship along with the norms of free speech. To those societies whose citizens relate to each other like blood brothers, establish their solidarities based on their enemies within and enemies without and see their future only in the image of a glorious past that knows no words of wisdom on the frailties of human nature and on the darkness of human heart, every fairy returning from the world of the dead looks like a many-headed monster just about to devour them and they can easily lose their minds in their introversion exasperating existential fears , and eventually succumb to violence and ruin. As the Bulgarian philosopher Todorov puts it, they bleed to death out of a tiny little scratch.

Third and most important, yesterday was not the first time we shot Hrant Dink in the back. We had shot many Hrants, Rakels, Anahits, Tigrans, Agops in the back in 1915. True, thousands of us entered Anatolia from the Balkans, many thousands from Caucasia?fleeing indescribable atrocities, tortures, and injustices. True, many Kurds and Turks rescued many Armenians, hid them in their homes, barns, hid them behind the mountains for days, weeks, perhaps for years?But there is another truth, that is, even if it was not us, even if it was not our mothers, fathers, grandfathers who actually held the swords and the rifles that took Armenian lives, the catastrophe of 1915 remains to be a crime committed in our name, it remains to be a crime against humanity and human plurality committed in the name of ?Turkishness.? Thousands of us, especially those in the Eastern and South-Eastern Anatolia, grew up in the houses that Armenians left behind, cultivated their lands, collected apricots from their trees, baked and sold bread in their bakeries?made a wealth out of their businesses. We erased the memories of thousands through forced conversions, transplanted them in our households as our new wives and sisters, and expected them to be grateful to us for crippling their souls We did not want to see, did not want to understand that what we destroyed in less than a year was one of the oldest Christian cultures in the world, the making of which had taken a thousand year having survived many more invasions and slaughters.  For many years, we practiced shooting drills on the walls of Akdamar Monastry Church in Van and riddled its reliefs, as we have riddled the body of Hrant Dink. In our culture of impunity where any Armenian existence has become completely superfluous since the Armenian massacres of Abdulhamid, we should think twice before we interpret the confession of the 16-year old murderer of Dink as the manifestation of some pathological deviance: ?I approached him from behind and shot him from a distance of 1meter. I?d do it again today. I have no regrets.?

Turkey is now at a crossroads. We have to think about the relationships of these three realities with each other, we have to think through their inseparable trajectories and histories in the making of our Turkishness and in the making of our ontological other, the Armenian. Very carefully and very seriously. Only when we can see the essential relations of these realities, we will stop shooting each other in the back for our differences and start building the institutions in our country that will let us co-exist as citizens of Turkey, not as Turkish citizens. On then, we can chant, ?We are all Armenians,? ?We are all Hrant Dinks? in all our honesty. Only then, we will all deserve to be a Hrant Dink. For now, we remain to be the Turks who shot Hrant Dink in the back.

Photo: Mourning crowd in the funeral of Hrant Dink on 23 January 2007

*The mentioned Bill is the one which considers a crime to deny the Genocide. It is different than the French law of 2001 that recognized the Armenian Gencodide as crime against humanity (Azad-Hye)