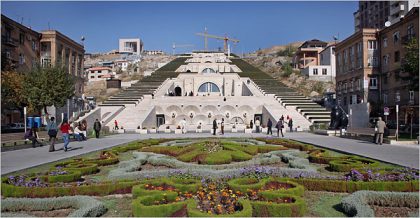 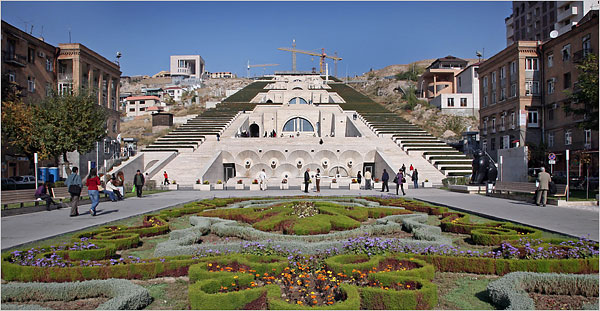 YEREVAN, Armenia ? Some 20,000 Armenians turned up for the opening of the Cafesjian Center for the Arts last week. They jammed the new sculpture park and the terraced gardens and galleries, including the first exhibition ever in Armenia of the Armenian-born American great, Arshile Gorky.

The center, a mad work of architectural megalomania and historical recovery, is one of the strangest but most memorable museum buildings to open in ages. Imagine an Art Deco version of the Hanging Gardens of Babylon stretching nearly the height of the Empire State Building, its decorations coded with Armenian symbolism.

Did I mention the artificial waterfalls?

Built into a gigantic hill in the commercial heart of this capital city, with a staircase that climbs the outside linking the gardens, the place was originally conceived in Soviet times to be topped by a monument to the Soviet revolution. That it has been turned into a contemporary-art center by a rich American is a twist of history whose symbolism is lost on no one here.

There?s no endowment, no professional board, so it may very well soon fall flat on its face, as so much has in this country where widespread corruption, lethargy and years of isolation have led to an unemployment rate around 40 percent, a crumbling infrastructure and almost no middle class.

But for the time being, at least, it is doing what precious few museums, and even fewer vanity enterprises like it can dream of doing ? namely, offering a whole nation a kind of uplift.

From morning to evening, as if out on prom night, young Armenians at the opening rode the center?s escalator, in many ways the main attraction, which rises via several grand, plaza-size landings inside to, of all things, a little jazz lounge, where a view of the city unfolds beyond tall windows behind the stage.

Armenia?s president, Serge Sargsyan, surrounded by swarms of security guards (politicians can?t be too careful here) took time out from the debate over opening the border with Turkey. He joined Gerard L. Cafesjian, the 84-year-old Brooklyn-born Armenian-American patron of the center, and the center?s director, Michael De Marsche, among others, to hear the inaugural set.

These days Armenian newspaper headlines dwell on the Turkish border opening, which the United States quietly presses for to gain an oil pipeline that can sidestep Russia and Iran. In return Turkey wants to table once and for all any talk about having committed genocide in the killing of more than a million Armenians nearly a century ago. Admitting to genocide has legal ramifications in terms of restitution. So President Obama has lately stopped using the G word, leaving Armenians to choose between desperately needed economic improvement and justice in the defining calamity of their history.

Paralyzed for decades by that event, turned in on itself, landlocked and surrounded by mostly hostile neighbors, Armenia has had until now almost no place to see modern and contemporary art from outside the country. When a perfectly anodyne fat Botero sculpture of a cat was installed in the new center?s sculpture park a few years ago, it caused a scandal. Then, resistance melted. As the center?s opening proved, thousands of young Armenians are hungry for what?s beyond their borders and are open to change.

I arrived, having been invited to lecture at the opening, dimly aware of the center?s history, which began during the 1930s, when a prominent local architect, Alexander Tamanyan, conceived the Cascade, as it?s called, a towering, white travertine ziggurat of artificial waterfalls and gardens tumbling down a promontory that links the historic residential and business centers of the city. Banquet-hall-size meeting rooms were devised for Soviet apparatchiks.

The plan was largely forgotten until the late 1970s, after which construction began. Then came the earthquake in 1988 and the breakup of the Soviet Union in 1991. Like much of the city during the post-Soviet years of transition, the Cascade was left in the lurch.

Enter Mr. Cafesjian, from Minnesota. Armenian officials agreed he could erect a building on top of the Cascade in which to show his collection if he would complete the Cascade. Work started in 2002, but costs spiraled swiftly out of control. What had been imagined as a $20 million undertaking soon topped $40 million, with no end in sight.

Mr. Cafesjian regrouped. Two years ago he hired Mr. De Marsche, then president of the Colorado Springs Fine Arts Center. The building on top was put on hold, the focus instead turned toward completing the Cascade and the sculpture park at the foot of it. Tamanyan?s original meeting rooms became art galleries, a gift shop and the jazz lounge.

Peculiar doesn?t begin to describe the results. The galleries are irregular and spaced far apart, some of them reachable only outdoors across the gardens, which in winter will be frigid and covered with snow.

The collection is also a mixed bag. Mr. De Marsche wisely pushed for displaying only a few works from it, with the emphasis on glass.

It?s a world away from other museums here. I stopped several times into the National Gallery, an aging palace of marble, worn carpets, bare light bulbs and creaky floorboards in the middle of the city. You wouldn?t necessarily know it was a gallery from outside. The facade is covered by billboards for a bank. An unmarked entrance is shuttered by Venetian blinds. Even on Saturday and Sunday afternoons I was the only visitor in the entire place. Elderly female guards in starched white shirts, startled, glumly rose to watch me pass.

Through the gallery?s windows, bossa nova music wafted incongruously from an empty Soviet-era amusement park nearby. A panorama of half-finished apartment blocks, Hummers and luxury shops for the oligarchs, and bulky statues of Armenian heroes on horseback spread out below.

According to Raffi Hovannisian, Armenia?s former foreign minister, the country now depends for some one-third of its economy on money sent by Armenians abroad. The global collapse has been devastating. Several years of double-digit economic growth during the early 2000s have largely evaporated.

Even Dennis Doyle, who sits on the board of Mr. Cafesjian?s family foundation, wondered aloud about the center?s future. Mr. Cafesjian promises to pay for it. But that means it all depends on him in the end. The Armenian government is no safety net.

Karen De Marsche, Mr. De Marsche?s wife, said she was sitting in a restaurant here with a friend one recent afternoon when a man rushed in, agitated, and begged for something from the manager, who disappeared into the kitchen. The friend, who knew the man, got up from the table to find out what was wrong. She returned, distressed.

The friend explained that the man was canvassing restaurants. His uncle had just died in the hospital, and the man told hospital officials the rest of his family couldn?t make it to town for a couple of days.

Photo: “The Cascade” in Yerevan by Justyna Mielnikiewicz for The New York Times