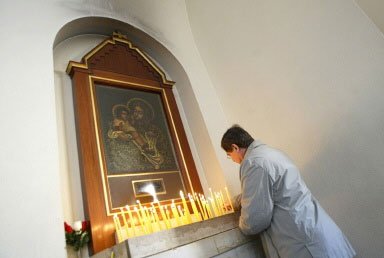 Nayla Razzouk from , wrote on 21 April 2004 the following article in the “Middle East Online“, a website dealing with Arab affairs.

's well-integrated Armenian community is gearing up for the 90th anniversary of the massacre of their ancestors in Ottoman Turkey amid concerns over emigration which has halved their number in 15 years.

The Christian Armenians have been hit by the same economic hardships as other communities in the tiny Arab country which welcomed their forefathers with open arms.

From 250,000 at the end of 's 1975-1990 civil war, during which tens of thousands emigrated, the Armenian community has dwindled further to about 120,000, according to political and religious leaders of the community.

“We suffered emigration like all other communities in post-war . We are trying to face that problem, and so are our churches, with financial and housing aid,” said MP Jean Ogassabian, one of six ethnic Armenian deputies in the 128-member parliament.

“But since 's independence in 1991, many of the funds that we used to receive are now going” to the former Soviet republic, said another, MP Serge Tor Sarkissian.

hosts the Arab world's largest Armenian community, the descendants of survivors of the 1915-1917 massacres of Armenians who are now leading a global campaign to declare the mass killings a genocide.

The massacres have been acknowledged as genocide by a number of countries, including , and . Armenians around the world will mark the 90th anniversary of the start of the slaughter on April 24.

“A draft law proposal for official Lebanese recognition of the genocide has been in my drawer for two years because does not need more crises. We are Lebanese first, and we are forever grateful to ,” said Tor Sarkissian.

Most of 's Armenians hail from the region of Cilicia, today in , and not in the present-day state of .

From refugees living under tents on wastelands, the Armenians gained the respect of other communities in with their skills and hard work that allowed them to gain prominent economic and political positions.

The community is today represented by a government minister, six MPs and three main political parties. The mother and wife of President Emile Lahoud are of Armenian origin.

Many of 's top jewellers, leading industrialists, prominent physicians, popular television presenters, artists and at least half of the musicians of the national symphony orchestra are Armenians.

If many Lebanese are known to speak Arabic, French and English, some Lebanese Armenians are even quadrilingual.

At election time, the Armenian vote is an important factor since many of them are registered in and important regions nearby. They have however often been criticised for voting in block, in favor of the government of the day.

The Armenians maintained a neutral stand during the war.

“The Armenians mind their own business to the point that they even celebrate Christmas on their own,” on January 6, said Wassim Husseini in a joke summing up how Armenians are generally viewed.

But such stereotypes belong more to the past, said Arda Ekmekji, dean of arts and sciences at , the only Armenian higher learning institute outside .

“Today, Lebanese Armenians are completely integrated, they live across the country and speak perfect Arabic,” she said. “When two Lebanese meet in , they naturally speak Arabic!”

Beside the input of the family, Armenian identity is kept alive by active political, cultural and sporting institutions as well as some 70 Armenian schools and the university.

And there is the commemoration of April 24.

Near Saint Gregory the Illuminator Armenian church north of , children file in groups into a mausoleum to watch in silence a display of skulls from the massacre.

In the all-Armenian of , in eastern , residents live amid apple orchards, vineyards and Islamic ruins in six quarters named after the six villages of mountainous Musa Dagh, in today's .

Armenians from around the world trek to Anjar to pray at the memorial of the heroic and poorly-armed Armenian villagers in Musa Dagh who, faced with almost certain death, fought for 40 days against invading Turks in 1915.

Newer Post'Viken Couture' in Abu Dhabi
Older PostWould you wish to be an Armenian in 1915?