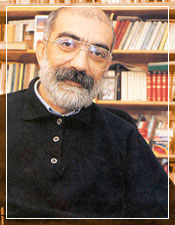 The following is an article by Turkish novelist, political commentator and liberal columnist Ahmet Altan (born 1950, graduate of Faculty of Administrative Sciences at ), who works as journalist and TV producer. He is author of several best selling novels. He has been persecuted by his country's justice system for articles published in the press.

At one point all Turkish dailies stopped publishing his articles when he wrote in the daily newspaper “Milliyet” (2001) a column titled “Atakurd”, in which he wondered how the Turkish people would react if they were living in a country called ?Kurdey?, where basic rights of citizens other than Kurds were violated.

The following article titled “Genocide ?” was published on 9th May 2005 in the popular Turkish political commentary website Gazetem.net.


I would like to ask a very simple, ordinary question.

Because now you know you would have been killed.

Please stop arguing about the number of murdered or the denials or the attempts to replace pain with statistics.

No one is denying that Armenians were murdered, right?

I don't know which number is the truth, or whether anyone knows the true number accurately.

What I do know is the existence of the death and pain beyond these numbers.

I am also aware how we forget that we are talking about human beings when we are passionately debating the numbers.

Those numbers cannot describe the murdered babies, women, the elderly, the teenage boys and girls.

If we leave the numbers aside, and if we allow ourselves to hear the story of only one of these murders, I am sure that even those of us who get enraged when they hear the words “Armenian Genocide” will feel the pain, will have tears in their eyes.

Because they will realize that we are talking about human beings.

When we hear about a baby pulled from a mother's hands to be dashed on the rocks, or a youth shot to death beside a hill, or an old woman throttled by her slender neck, even the hard-hearted among us will be ashamed to say, “Yes, but these people killed the Turks.”

Most of these people did not kill anyone.

These people became the innocent victims of a crazed government powered by murder, pitiless but also totally incompetent in governing.

This bloody insanity was a barbarism, not something for us to take pride in or be part of.

This was a slaughter that we should be ashamed of, and, if possible, something that we can sympathize with and share the pain.

I understand that the word “genocide” has a damningly critical meaning, based on the relentless insistence of the Armenians' “Accept the Genocide” argument, or the Turks' “No, it was not a genocide” counterargument, even though the Turks accept the death of hundreds of thousands of Armenians.

And yet, this word is not that important for me, even though it has significance in politics and diplomacy.

What is more important for me is the fact that many innocent people were killed so barbarically.

When I see the shadow of this bloody event on the present world, I see a greater injustice done to the Armenians.

Our crime today is not to allow the present Armenians even to grieve for their cruelly killed relatives and parents.

Which Armenian living in today can openly grieve and commemorate a murdered grandmother, grandfather or uncle?

I have nothing in common with the terrible sin of the past Ittihadists, but the sin of not allowing grief for the dead belongs to all of us today.

Do you really want to commit this sin?

Is there anyone among us who would not shed tears for a family attacked at home in the middle of the night, or for a little girl left all alone in the desert during the nightmare called “deportation,” or for a white-bearded grandfather shot?

Whether you call it genocide or not, hundreds of thousands of human beings were murdered.

Hundreds of thousands of lives snuffed out.

The fact that some Armenian gangs murdered some Turks cannot be an excuse to mask the truth that hundreds of thousands of Armenians were murdered.

They died in pain, tormented, terrified.

Is it really so important what religion or race these murdered people had?

Even in these terrifying times there were Turks who risked their lives trying to rescue Armenian children.

Instead of justifying and arguing on behalf of the murderers, why don't we praise and defend the rescuers' compassion, honesty, and courage?

There are no more victims left to be rescued today, but there is a grief, a pain, to be shared and supported.

What's the use of a bloody, warmongering dance around a deep pain?

Forget the numbers, forget the Armenians, forget the Turks, just think of the babies, teenagers, and old people with necks broken, bellies slashed, bodies mutilated. Think about these people, one by one.

If nothing moves in you when you hear a baby wail as her mother is murdered, I have nothing to say to you.

Then add my name to the list of “traitors.”

Because I am ready to share the grief and pain with the Armenians.

Because I still believe there is something yet to be rescued from all these meaningless and pitiless arguments, and that something is called “humanity.”

Translated by the Zoryan Institute

See other articles of Ahmet Altan