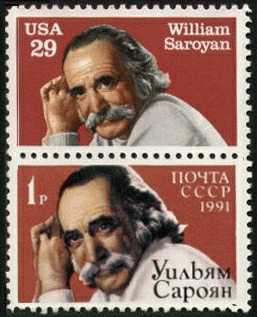 I was young, 11 or 12, reading my way through another hot Virginia summer. He was already in his late 50s, dividing his time between Fresno and Paris.

Actually, William Saroyan never knew I existed. And l didn't know about him until I read “The Human Comedy,” which my brother, Paul, and I discovered among the stacks of books my librarian mother would bring home.

Paul and I felt like we'd discovered fire. I can't even remember all the reasons, but we thought Saroyan was just about the greatest author ever. Somehow he just knew how the world looked to kids, in all its sadness, adventure and sweetness. Authority figures could be bewildering in their stupidity. Adult relatives could be funny and even crazy, but within a safe, extended family framework.

We'd never heard of Armenians before, but as we learned a little about Saroyan, we thought they must be just like Southerners, only a lot more interesting, and apparently louder.

If I'd known then what I've learned from the stories we'll publish in The Bee and on fresnobee.com for the rest of the month, I would have been even more enchanted. And if I'd read “Follow,” the novella we begin publishing in installments today about a strong-willed teenager who strikes out to find his place in the world, I'd have been completely hooked.

It's my fervent wish that other kids now will make the same discoveries I have. Saroyan is cool, and so is Fresno. Because in many ways, I've come to see as a transplant the past 11 years, the more you learn about one, the more you know about the other.

Saroyan was a poor immigrant kid who turned out to have a lot more going on than people suspected. He wasn't much of a student, and truth be told, was a square peg who gave up on mainstream education fairly young. But he devoured books and looked and listened. He was funny, earthy, independent and resourceful.

Unlike Fresno, which suffers from a chronic inferiority complex, Saroyan had an ego as big as the Sierra. Like Fresno, but in a different way, he was decidedly hot! Just check out the picture on the front page of today's paper. He wasn't always the mustachioed eccentric most often depicted these days.

I hope that our month-long Saroyan project sparks a revival of interest in the author. I'd guess that even in Fresno, to a lot of kids Saroyan is just a name on a theater or an elementary school. If they'd read his work or even about him, they'd not only have a great time, but they'd develop a new respect for the place where they live.

For the Saroyan project, reporters Donald Munro, Guy Keeler and Don Mayhew are writing about Saroyan's life, celebrity and literary legacy. Reporter Doug Hoagland will write about the discrimination experienced by Armenian immigrants, which Saroyan refers to in “Follow.”

On fresnobee.com, we've assembled dozens of photographs of Saroyan and old Fresno, with help from the Pop Laval Foundation, the Fresno Armenian Society and historian Bill Secrest Jr. of the Fresno County Library. Assistant Photo Editor Renee Fernandes has created slideshows from Saroyan's life, with background music from the period.

If you miss any part of the novella in print, you can find it all on fresnobee.com. There's a bonus on the online version: Managing Editor Jack Robinson has annotated the manuscript with hyperlinks to click on for explanations of names or places that might not be familiar.

Then there are the audio clips taken from an interview with Saroyan, first broadcast in 1976, on KFCF, FM 88.1.

It makes sense. In the end, culture is about people and their stories, ideas and feelings — all the things Fresno is lush with. Read Saroyan's novella, browse through the pictures online, listen to him talk about Fresno, and think about how much more this soil has nurtured over the years than grapes and peaches.

It's a mystique that definitely captured the imaginations of a couple of kids in Virginia 40 years ago.

Betsy Lumbye is executive editor and senior vice president of The Fresno Bee. She can be reached at [email protected]