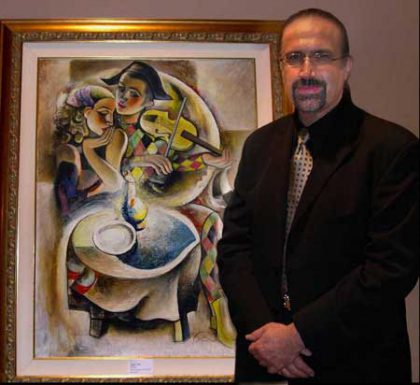 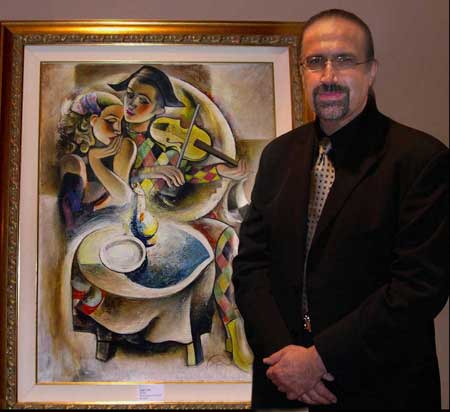 Varoujan, born of Armenian parents in Aleppo, Syria, began to paint almost as soon as he could hold a brush. His family did not encourage him to pursue his talent, since his father had his heart set on medical career for his son. He threw his paints out of the window and broke his brushes.

At age fifteen, Varoujan took a painting to the State Institute of Fine Arts in Aleppo, and asked the director whether he was worthy of instruction. He was told that he would be given a degree in a few years, but that he already knew everything they had to teach him.

While still in high school, Varoujan attended the Sarian Academy, an art school and cultural center in Aleppo, where intellectuals often met.

In 1969, Carzou, world renowned French artist, visited the city of Aleppo. As a part of his tour, he stopped by the Sarian Academy and discovered Varoujan's paintings among the others. He encouraged him to continue his education in art.

His remarkable career began in 1969, when a magnificent new museum was built in Aleppo. The nineteen year-old artist's paintings were chosen for the inaugural exhibition. The festive affair was attended by VIP's from the Russian Embassy in Damascus, who noticed Varoujan's work. The Russian dignitaries offered to enroll him in the ultra-selective Institute of Fine Arts in Yerevan, the capital of Soviet Armenia.

Varoujan left Aleppo in 1969 for Soviet Armenia to dedicate himself to the pursuit and study of fine arts. He was one of only seven new students enrolled that year in the Academy of Fine Arts.

“By this time, my father was in tears,” Varoujan recalls. “He challenged me. Was I not intelligent enough to enter medicine?” Trying to please his father, Varoujan interrupted his art studies for a year and entered the Institute of Medicine. His grades were excellent, but he was miserable! He asked the Minister of Education in Yerevan to let him return to Art school. “No one switches from Medicine to Art,” he said. “But you… you are crazy. Be my guest.”

Soviet Socialist Realism was the style in those days, Varoujan calls. “Do you know what it looked like? Very somber. Preferably factory workers, soldiers or peasants. And my soul needed color and poetry!” He painted just the way he wanted and took care to give the paintings the proper Communist-sounding titles. By then there was almost no connection between his paintings and their titles. It was the only way he could continue to exhibit his art. He soon received his Master's Degree and began work on a Ph.D. in Art.

In 1979, he left Soviet-dominated Armenia, where he had been working on his Ph.D. in art at the Institute of fine Art in the capital city of Yerevan. Feeling stifled by the restrictions of the government-run art projects, he sought a life with more artistic freedom. Leaving behind all his paintings, which under soviet rules belonged to the state, he came to America to fulfill his need for unrestrained creative expression.

Unable to find work in the Boston area related to his artistic talents, he took any job, just to survive. His sister had warned him of the difficulties of finding work as an artist in the US. Already