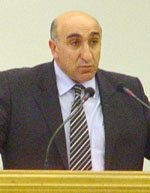 In June 2003, David Lokian was appointed by President Robert Kocharian as Minister of Agriculture, together with two other ARF members Aghvan Vardanian (Minister of Social Security) and Norayr Davidian (Minister of Health).

During his tenure as Minister, Lokian introduced technological advancements in Armenia's farming communities. Crop yield was increased through improvements in irrigation technology and fertilizer quality. He also eased the interest rates on government issued loans and tried to repopulate the countries forests.

In May 2007, at Armenia's parliamentary elections, Lokian was elected to the Parliament on ARF party list.  He retained his position as Minister of Agriculture, when ARF entered into agreement in June 2007 with the ruling coalition of the Republican Party and Prosperous Armenia Party.

In March 2008, President Kocharian met with Minister Lokian to discuss the implementation of government backed agricultural programs. Lokian reported on his activities in preventing price hikes for agricultural goods that have been affected by surging world prices. He told Kocharian that the country's priority is to achieve grain self-sufficiency. The two men also spoke about the latest government plan to boost domestic corn production in several provinces (Tavush and Lori). They discussed also the process of agriculture subsidizing, which affected 100,000 Armenian farmers in 2008.

Most recently, David Lokian directed a research team conducted by ARF party outlining the economic consequences of the opening of land border between Armenia and Turkey.

A conference was held in June 2009 to discuss the findings of the report. Lokian reported that there were 20 free trade zones within Turkey. These zones, Lokian explained, could pose a potential danger for Armenia as cheap goods and products produced in these zones begin to roll into Armenia.