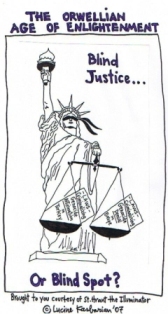 Lucine Kasbarian is a New Jersey-based writer and self-syndicating cartoonist whose comics have appeared in a number of publications including The Armenian Weekly, The California Courier, and Blogian.net. She is a second generation-born American-Armenian descendant of Armenian Genocide survivors, and the author of Armenia: A Rugged Land, an Enduring People (Simon & Schuster). Lucine was brought up in an Armenian-speaking home where humor, politics and the arts shared equal stage.

She first began producing political cartoons in response to the appalling murder of Hrant Dink and as a way to constructively express her outrage over social injustice and réalpolitik. As a cartoonist, Lucine's intention is to spotlight realities and hypocrisies that do not receive adequate coverage in mainstream media; to see her work appear in media outlets that reflect the traditions of a truly free press; and to drive the points home in absurdist, paradoxical ways by drawing from history, popular culture and personal experience. Her works will soon be online at www.webcomicsnation.com/lucinekasbarian

Samples of Lucine Kasbarian's work (click on each link to get the .JPG photo):

No Place for Hate (ADL Hypocrisy; part one; Aug 07)

*Appeared in “The Armenian Weekly”