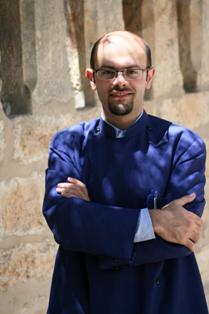 Fr. Minasyan's primary goals are to strengthen the Armenian presence in the Holy Land and to encourage Armenians worldwide to make the traditional Armenian pilgrimage to Jerusalem.

Since 2004 Fr. Minasyan is a B.A. student in the School of Education at the Hebrew University of Jerusalem. He is fluent in English, Hebrew, Russian and spoken Arabic.

For comments on the website, suggestions & future contacts, please write to: [email protected]

Interview with Father Issahag Minasyan in Jerusalem
It is sad that many Armenian communities living in the Middle East can't make pilgrimage to Jerusalem, says Father Minasyan.

You have been in Jerusalem for more than a decade now? What changes do you notice during this period?
It depends what kind of changes you are looking for.  A decade ago I haven't had chance to know the city and the people so well. I guess some positive changes have taken place, but they are tiny and do not allow to evaluate correctly.

Can you tell us about your photography project? Are you getting any feedback? Is the project helping to encourage pilgrimage to the Armenian locations in the Holy Land, as you were hoping?
When I first started to spread out photographs from the Holy Land and cover ceremonies, I noticed increased interest among people who have been in Jerusalem, more or less linked to Jerusalem, have memories with this city or have read much about it. However, I don't get much feedback directly. My aim is to raise interest amongst Armenians - first when they see the photographs and then, at a later stage, when they see the city in reality, with their own eyes and are called mahdesi … I assume, therefore, that the interest is increasing… (check the website: www.fi-photos.com).