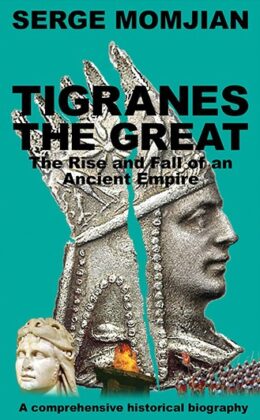 The latest book by Serge Momjian (“Tigranes the Great: The Rise and Fall of an Ancient Empire”, 2020) is of the genre of “historical biography”.

Azad-Hye asked the author if he had difficulty in finding enough historical data for forming the material of the book.

“I have spent of course a lot of time to extrapolate it from ancient literary reliable sources,” Momjian replied.

Since he writes in English, we inquired which of his books he would like to see translated into Armenian and published in Armenia?.

“I certainly would like to see Tigranes book translated into Armenian, for it might be of interest to our readership with added corroborated dialogue. It doesn’t really matter whether it is published in Armenia or abroad. By the way, a member of the former Ministry of Diaspora of Armenia was very interested to have our Komitas book translated some time ago, but we don’t know what happened to that project,” Momjian said.

Tigranes the Great ruled the Kingdom of Armenia from 95 to 55 BC. He formed a close alliance with Mithridates VI, Eupator and King of Pontus, to secure each other’s flanks from the expansion of Rome.

Tigranes’ troops, commanded by his generals, entered Mesopotamia and annexed the northern dynastic kingdoms under Parthian rule, turning them into his vassals. One invasion was followed by another in what became a growing imperial war of conquests. Those victories enabled Tigranes to take the Achaemenid proud title of “King of Kings”, after which he conquered the crumbling Seleucid kingdom and the lands as far south as Phoenicia.

Around 70 BC, Tigranes reached the summit of his fame and glory as his kingdom was transformed into an empire, stretching from the Caspian Sea in the east to the Mediterranean Sea in the west. It was only a matter of time before Lucullus, followed by Pompey, marched their legions into Tigranes’ dominion and reduced it to its original borders.

This book is a gripping account of the royal life and fate of this audacious Hellenistic king, who has left an everlasting mark in the annals of history. It provides valuable and crucial insights into the motivations leading up to the invasion of his empire and some corroborated dialogue that brings the main characters vividly to life.

Serge Momjian was born in Beirut in 1946. He moved to London in the 1970s and studied journalism then took a degree course in creative writing.

He has worked as a reporter, covering arts and culture for major publications, including Beirut’s Daily Star (the Middle East’s leading English-language newspaper) and London’s Events magazine. His feature articles have been translated and published in the Armenian press. By the time he reached his forties, he was devoting his time to writing novels. His works, all published in the United Kingdom, include Conflicting Motives, The Invisible Line, The Singer of the opera, Memories of the Past, Komitas: The Artist and the Martyr, and Gateway to Armenia.

In recognition of his biographical Komitas book, which included dialogue for the first time and was written in commemoration of the centenary of the Armenian Genocide, he was awarded the William Saroyan medal in 2015 by the Ministry of Diaspora of the Republic of Armenia. During his literary career, his innovative writings have brought him praise and a good reputation.