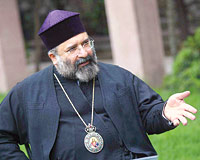 Mesrob II studied theology in 1979-1982 at the Hebrew University of Jerusalem in Israel.

He held several positions in Turkey's churches including bishop, chairman of the Religious Council, patriarchal vicar for Ecumenical Affairs, overseer of the Theological Auditorium, vice-president of the Patriarchal Advisory Council and archbishop.

He is the editor-in-chief of the Shoghagat Theological Review.

He has academically worked on the “Vanakan Vartabed's Commentary of Davoush on the Book of Job.”

He is bilingual in Turkish and English and uses classical Armenian, Hebrew, French and Italian in his academic studies.