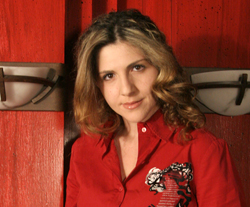 Shaghig “Sherry” Toukhmanian Festekjian was born and raised in Abu-Dhabi, United Arab Emirates and is of Armenian descent. Growing up, Sherry was interested in writing, piano, debates, and acting in stage plays. In her senior year of high school she even directed a play called Saving Peace. During her time in college at the American University of Dubai she majored in Marketing and was the editor of the school newspaper for a year. Before moving to the United States in 2000, shortly after getting married, she was an active member of the Armenian community in the UAE and tries to remain active to this day.

Upon moving to the US, Sherry decided to go back to college. She attended Pierce College for a short time and directed another play called “A Moment of Anger“. She then transferred to California State University Northridge to pursue a degree in film. During her time at CSUN she wrote, directed, and co-produced the short film, Repercussions of an American Dream. She followed that project by producing the short film Fall From Grace.

About her personal life, Sherry loves all cultures and is able to speak four different languages (English, Armenian, Arabic, and French). Sherry manages to balance school and her love of film making with her family. She is married to a patient husband and is the mother of a bright, young son.