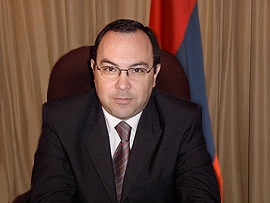 Dr. Rouben Karapetian was appointed Ambassador of the Republic of Armenia to the Arab Republic of Egypt by presidential decree on October 12, 2004.

Prior to assuming this position, Ambassador Karapetian served as Director of the Asia-Pacific and Africa Department at the Ministry of Foreign Affairs since October 2000. In that capacity he was in charge of policy formulation and implementation of bilateral political, economic and cultural exchanges with the countries of the specified region. In 1999-2000 Ambassador Karapetian served as Chief of Staff of the Foreign Minister of Armenia. He was responsible for organization of the Minister's official visits, meetings, and public relations, as well as supervised staff-related works and Ministry's finances.

In addition to his diplomatic service, Ambassador Karapetian delivered lectures on Modern History of the Arab World and International Relations at the Faculty of Oriental Studies of the Yerevan State University from 1999 till 2004. He also worked as Head of Asian Countries Division at the Institute of Oriental Studies of the National Academy of Sciences from 2003 to 2004.

Ambassador Rouben Karapetian is the author of three books and more than 30 articles on international relations and contemporary history of the Middle East. He holds a Master's degree in Arab Studies from Yerevan State University, Faculty of Oriental Studies. He received a PhD in History from the National Academy of Sciences of Armenia in 1999.

Beside his native Armenian, Ambassador Karapetian is fluent in Russian, English, Arabic and Greek.

He is married and has a daughter.