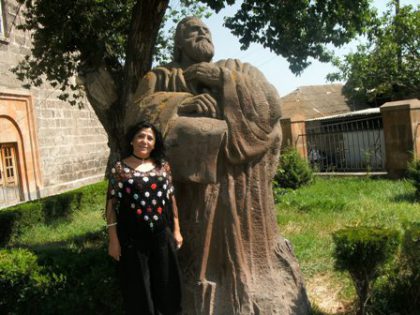 Seta Krikorian is born in Beirut, Lebanon. She has graduated from Hamazkayin Armenology Seminar in 1989 and followed her studies in Yerevan, where she graduated in 1993 from Yerevan State University's Armenian Philology Department.

Since 1983 she has been teaching in Armenian schools in Lebanon and Canada. Her writings have appeared in Armenian dailies and periodicals (Aztag, Asbarez, Horizon, etc). Currently she is holding the position of Deputy Editor of Pakin Armenian Literary Periodical in Beirut, Lebanon. Her first poetic work “Border” appeared in 2006 in Yerevan. She is preparing her second book, which will be a collection of short stories.

Seta Krikorian in Oshagan village in front of the statue of Mesrob Mashdots, the inventor of the Armenian alphabet 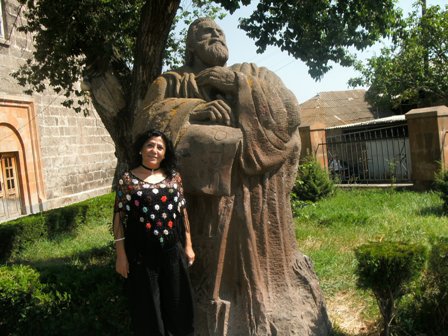