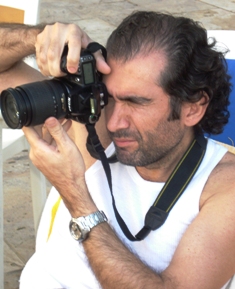 Mihran Kizirian's father Hagop Kizirian was born in Jerusalem in 1937 and started in photography business. In 1960 he migrated to Beirut, Lebanon, got married and worked with Kodak Company as photographer. Mihran was born in Beirut in 1964.

He migrated with his family to Amman, Jordan in 1981, where his father opened one of the first photo colour laboratories with Zohrab Markarian. Mihran started working in the laboratory, printing and enlarging photos of the royal family and the late King Hussein. Since 1995 he became the personal photographer of Her Royal Highness Princess Muna Al-Hussein, wife of the late King Hussein and mother of King Abdallah Al-Hussein II.