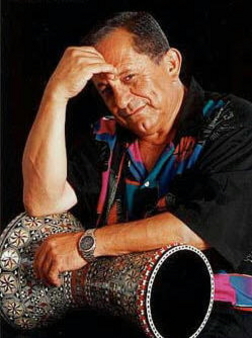 Setrak Sarkissian has been regarded one of the best percussionists in the Middle East. He is a master player of the Arabic drum (tabla). Through his unique performing techniques, he has contributed to both traditional and modern Arabic music.

His works are featured in many recordings and movie soundtracks. He has performed with many Arab world stars including Fairuz, Muhammad Abdel Wahab, Farid El Atrash, Abdel Halim Hafez, Sabah Fakhri, Fayza Ahmad, Warda, Sabah, Majda Al Roumi and others.

Setrak Sarkissian is born in Beirut, where he still lives in the Armenian neighborhood of Bourdj Hammoud. He spends his time in teaching and touring the world with international performances.

Since early age, he has depended on himself in developing his talents. Hailing from a conservative society, he had to overcome many obstacles to reach his goals. In his early twenties, soon after he enrolled at the local conservatory, he was acknowledged for his capabilities and he progressed rapidly.