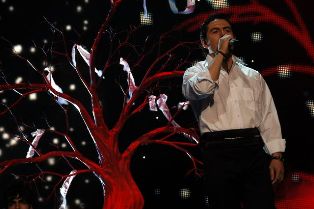 Armenia was the last country to rehearse today (8 May 2007). Hayko performed his dramatic ballad in as both professional and heartwarming way, with a moving tree on stage.
?
Hayko is one of the most famous singers in his home country Armenia. In 2006, he was awarded the best male singer of the year, so it was no surprise that he ended up winning the Armenian national final. His song for the 2007 Eurovision Song Contest, Anytime you need, is a powerful ballad, the last chorus of which is being sung in Armenian language.
?
A bleeding heart and a moving tree
After their arrival to Helsinki, the Armenian delegation had to face minor problems – the stage artists had created a moving tree, but it didn't fully survive the transport to Helsinki. Fortunately they managed to repair it so that it could be used in the rehearsal. However, the plan to use pyrotechnical effects during the performance had to be ultimately cancelled due to security reasons. The whole scene design looked very elegant, with Hayko standing in front of the red tree, the branches of which started to move towards the end of the song, when the song lyrics switch from English to Armenian language. This should resemble a beating heart. White ribbons were attached to the branches as well as to the microphone stands of the two backing vocals. They were, like the drummer and the flutist on stage, dressed in traditional costumes. The main colour on scene was red, with trees and hearts being displayed on the background. Snowflakes rushed through this red wood, which added to the atmosphere of melancholy, as much as the fog that was applied and the wind machine that makes the white ribbons on the tree wave. In the end, the heart of the singer seemingly started to bleed, soaking his white shirt in red. All in all, the whole delegation was very happy with what they saw on stage and on the screens.
?
A ribbon for each wish
In their press conference, the delegation explained that, in fact, Hayko's song was part of the soundtrack of the new film Don't be afraid, the theme of which is the contrast between love and war, leading to tragedy and separation. The ribbons that are attached to the tree on stage each symbolise a wish of a sad person, waiting for it to be fulfilled. To enchant the tired journalists on the very last press conference of the national delegations in the 2007 Eurovision Song Contest, Hayko sang songs in Italian and Spanish language, and a fast song in Armenian language to close the conference.
?
Source: http://www.eurovision.tv/ 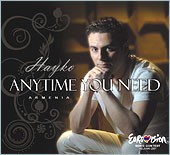