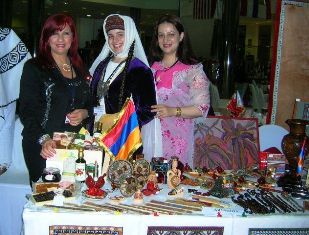 The charity bazaar is organized by the Diplomatic Group (Spouses of Ambassadors in the United Arab Emirates), under the patronage of Sheikha Fatima Bint Mubarak Al Nahyan, to benefit “Future Centre” for children with special needs.
?
Opening times:
10 April 2007, 7:30-10pm for VIP guests, ladies only.
11 April 2007, 10am-10pm, open for general public.
?
This year and for the first time, the Armenian Embassy in Abu Dhabi took part in the annual Charity Bazaar, organized by the Diplomatic Group which consists of Ambassadors' spouses in the UAE.
?
The event, under the patronage of Sheikha Fatima Bint Mubarak Al Nahyan, was held at the prestigious Ladies Club in Abu Dhabi.
?
Each country displayed various products and souvenirs for sale to benefit the “Future Centre” for children with special needs.
?
Armenia?s table was manned by Mrs. Armine Melikian, the Armenian Ambassador?s spouse and Mrs. Gulizar Jonian from the Armenian Community, a well known figure in the Abu Dhabi diplomatic circle. Ms. Daniella Melikian, the Ambassador?s daughter, graced the stand in her beautiful national costume.
?
On the first day, 10 April 2007, the spouse of Sheikh Hamdan Bin Zayed, Sheikha Eliaziah, opened the Bazaar and toured the tables with her entourage and the Jordanian Ambassador?s spouse. The Sheikha stopped at Armenia?s table, where Mrs. Jonian welcomed them in Arabic and introduced Mrs. Melikian. She, in return, presented the Sheikha with a beautiful –made in Armenia– goblet which was received by the Sheikha with appreciation.
?
The program of the day continued with a fashion show, followed by an Emarati song and dance show presented by the children of the “Future Centre.”
?
The Bazaar continued all day on April 11 and was well attended by individuals and families alike. A large number of establishments had donated valuable gifts for the lottery which was held every half an hour.
?
Mrs. Melikian has been very active since her arrival in Abu Dhabi in establishing good relations with the diplomatic spouses. The Armenian Embassy?s first participation in this Bazaar was very well received by the Armenian community members and the public at large.
?
Photos:
1- From left to right (upper left photo): Gulizar Jonian, Daniella Melikian and Armine Melikian.
2- With visitors (below photo).
?
You can contact the Embassy at the following e-mail.
? 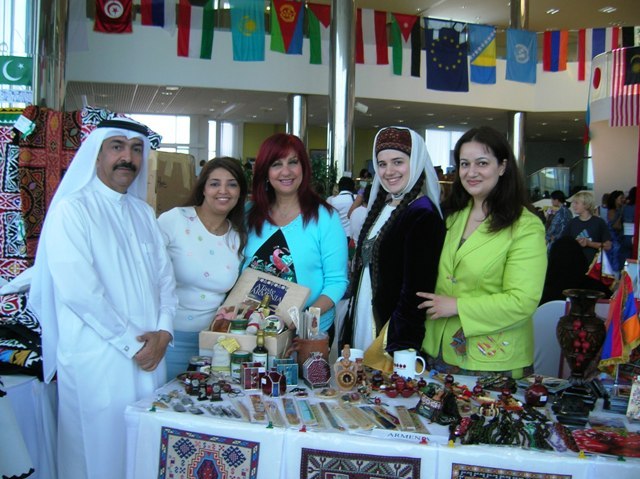