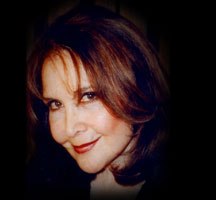 – In her new collection, Peace Quantum, celebrated poet Alicia Ghiragossian borrows the language of science to explore the nature of peace and love in three languages: English, Spanish, and Armenian. The subject of these poems ranges from the anguished wails of injustice, to meditations on such figures as Mahatma Gandhi and Martin Luther King Jr., to the power of joy. But the unifying element is love. Love is light, a wave and a particle, expressed and experienced in a multitude of fashions. Through love we release hurt and turn away from cruelty toward light. We recognize the interconnectedness of the universe, and we shape our own reality?these concepts are central to quantum physics, for in the act of observing, the observer changes reality.

Ghiragossian's view is undoubtedly that of a mystic. Her poems have a lyrical, soaring quality that evoke cathedrals; they are filled with exhortations to God and expressions of the joy of being engulfed by a divine love that leaves peace in its wake. But there is pain here, too, despair at acts of inhumanity, and a determination not to forget the past. The poet pleads with us to set right the wrongs we have done, for there is no peace without justice.

Some of Ghiragossian's strongest imagery reveals the effects of genocide:

But the protests stored

in my waiting people

the avenues of rejection

and still picking up grief along the way.

But even out of this darkness, there is the possibility for light:

We are deleting poison from our system

does not control us anymore

Our power is restored.

The universe has renewed

Now there is room for miracles.

For some, the fervor and mysticism of Ghiragossian's beliefs may make her poetry difficult to access at first glance, too tempting to label generically as “New Age” and move on. But for those who set aside critique and simply attempt to feel, this is remarkable, thought-provoking stuff. Accompanying the book is a CD. Read by Ghiragossian and set to music by Chopin, it is here that her poems soar most freely. A DVD with a short film by the poet and Brian J. Kronenberg is also included.

Alicia Ghiragossian is the author of 44 volumes of poetry. She was born in to Armenian survivors of the Genocide. After publishing poetry in her native , her poetry was translated to Armenian in 1967 and became a bestseller. She is one of the most beloved poets in and is the only living poet whose work has been illustrated by Pablo Picasso. Ghiragossian is also the recipient of several prizes and awards for her work in English, Spanish, and Armenian. She currently lives in .

They represent mystical and coded messages intended to ignite spiritual awareness. Whether the poems serve to give voice to human suffering or highlight injustice on a grand scale, they are thought provoking poetic discourses. They allow the readers to discover a pathway of healing through love, forgiveness, hope and peace, as well as forge their own reality.

Scientific data supports the notion that words, thoughts and feelings have a biomolecular impact on human beings. The messages register on a subconscious level, affect human behavior and, eventually, change the frequency of the universe. We can learn to harness that power and use it to recreate our planet.

These poems, in some small way, will help humankind achieve much desired peace and happiness.

Do not allow the bells

all over the world. 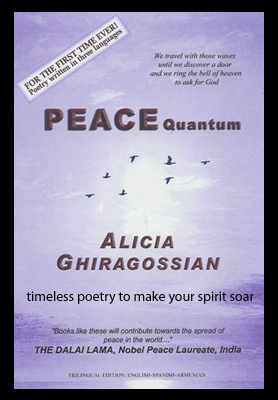 Let the voice of the suffering

echo through the waves

and let the rays

of a different sun

and the angels will travel

with a new melody

from note to note

as a soothing veil

to cover all the wounds

to erase the root

of hope on earth.

?And vibe upon vibe

go beyond this galaxy

to gather every being

around a master wish

and build up a universe

PEACE QUANTUM is Published in a trilingual edition by , 2005

To purchase a copy:

PERSONAL ESSAY: There is a reason for everything

I was born in , from Armenian parents, survivors of the first genocide of the twentieth century. Thus, began my life in two separate cultures. From an early age, I learned about the painful past of my Armenian heritage. I also learned to appreciate life, particularly peace and freedom, since my parents were always thankful for finding those values in , which they loved as their own homeland.

Perhaps that is the reason for my passion toward everything that is essential in life: love and peace, justice and freedom. I used to talk about these things with the stars, who were my best friends during my childhood.

I graduated from law school in . Having justice in my heart, I dreamt of doing something towards that end, through my profession. But the practice only served to show me the real world, so I resigned from that profession and shifted my dreams toward poetry.

I had been writing poems since age 14 and even published some in a local magazine when I was 16. I didn?t know then that words would be my tool to spread all the accumulated messages of justice, peace and love; to delve into the depths of thoughts and feelings and share them with the world; to expose my dreams of a better and happier humankind. Poetry helped to open my channels of imagination and become closer to metaphors, to other dimensions, and I coined my perceptions as ?metadimensional poetry.?

I never realized that I was in touch with other dimensions in my childhood, while talking to the stars, or listening to the fascinating stories of my grandfather , always involving miracles and the supernatural. But I really started to grasp metaphysics, at a conscious level, in my teen years when I read a book on the subject by Arthur Conan Doyle.

Through readings of the spiritual kind and channeling the poetical energy, the world of the spirits brought to me the understanding of the spiritual realm and how the universe works. I was introduced to precious secrets of the intangible world, which became the other side of the tangible world when I discovered Quantum Physics. I felt and experienced the oneness of the universe, humankind, and rediscovered the power of words. After all ?At the beginning it was the Word.?

Circumstances brought me to the and I added a new culture, a new venue to communicate: English. I worked harder to create and recreate my work in all three languages: Spanish, Armenian and English. It?s like having three lovers, all enriching you on different levels, with their own set of enchantment, permeating you with their own life stream.

Imperceptibly, my dreams became my mission, cemented like an inescapable destiny: to help restore faith, heal the wounds of genocide, expose the spiritual world and the need to forgive. I deeply believe that as much as you share your tears with the reader, poetry should ultimately have the purpose to refine the soul, help it grow, create beauty, inspire love, leave a legacy. I understand that everything I have been through, in life, has brought me to the place I am now. There is a reason for everything. I hope I can make a contribution to humankind with my work, no matter how small, no matter how humble.

Newer PostNew publication: Voices from Germany
Older PostOpening for a Secretary's position in the Armenian Church of Sharjah