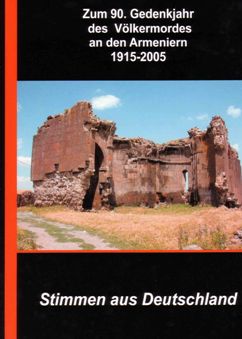 (?VOICES FROM ? ON THE OCCASION OF THE 90TH ANNIVERSARY OF THE ARMENIAN GENOCIDE)

The above book was recently published by the Catholicosate of Cilicia with the financial support of the Calouste Gulbenkian Foundation. As its title reflects, the book has a diversified content.

The publication has been edited and prepared for publication by Ishkhan Chiftjian, a student of theology in the of in . The foreword is written by His Holiness Aram I who is also the patron of the publication.

In the foreword entitled ?Memory and Justice,? His Holiness stresses the undeniable effect of memory on the life of an individual or people and the importance of justice. The Pontiff then draws connections between the Armenian Genocide and the concepts of memory and justice, emphasizing the urgent and imperative need of recognizing the Genocide and compensating for it.

The introduction by Ishkhan Chiftjian is entitled ?Genocide: The Definite Plural.? The editor explains: 1) The multi-faceted character of Genocide; 2) the presence of many terms synonymous to the word ?Genocide? in the Armenian Language; 3) the pluralism in the scientific fields that study Genocide (history, politics, etc.). He emphasized that Genocide is a comprehensive blow directed to a people?s unity.

?This publication aims at giving a wider scope to the memory of the approximately one and a half million victims of the Armenian Genocide as well as the numerous cultural riches (churches and schools, literature and press, manuscripts and dialect, etc.) that were destroyed, by collecting and presenting statements, positions, contemplations, questions from Germany on the most cruel incident of the most recent chapter of the Armenian History. What is presented here is only a picture and is not comprehensive,? writes Chiftjian.

52 German authors and one Swiss Genocide Scholars have contributed to the publication.

In the first part, entitled ?Answers?, 37 contributors answer to the six questions prepared by the editor sometimes in a few short paragraphs, sometimes in five-six pages. The questions are related to the authors? first encounter with the Armenian Genocide and the unfolding developments. The contributors to this section include catholic and protestant theologians, spiritual servants, historians, religion scholars, sociologists, linguists, authors, publishers, journalists and students.

Most are acquainted with Franz Werfel?s publication, which has triggered their interest in the issue. Others have gained interest in the matter because of ?s EU bid. Some of these authors have been involved in scientific and publishing work related to the Armenian Genocide (Ralph Giordano, Prof. Dr. Hermann Goltz, Wolfgang Gust, Rev. Manfred Richter, Prof. Dr. Martin Tamcke, etc.).

The contribution of two internationally renowned theologians (Prof. Dr. Wolfhart Pannenberg and Prof. Dr. J?rgen Moltmann) alongside the son of a great and unforgettable friend of the Armenian nation, Johannes Lepsius (Rainer Lepsius – former professor of sociology in the ) to this section should be distinctively noted.

The following research papers can be read in the ?Articles? section:

– ?The aspects of a Genocide? (Dr. Hilmar Kaiser, historian, )

– ?, and : Incentives of a critical dialogue between historians? (Prof. Dr. Hans-Walter Schmuhl, historian, )

– ?The acknowledgement of the Armenian Genocide is not a debate between historians; it is the topic and task of the lawyer. (Note addressed to the members of the German Parliament)? (Prof. Dr. Otto Luchterhandt, lawyer, ).

– ?The Taboo as a basis of the psychological illnesses embedded in the Turkish disgrace? (Esther Schulz-Goldstein, psychiatrist, )

– ?The Armenian Genocide and the Hebrew Holocaust: The boundaries and possibilities of a comparison? (Dominik J. Schaller, historian, Genocide Scholar, )

– ?Of what interest are Armenians to us? – The Armenian Genocide and our silence? (Prof. Dr. Georg Meggle, philosopher, )

– ?Giving a voice to people who have become voiceless? (Dr. Tessa Hofmann, Institute of Eastern Europe, )

– ?About the Heavy Burden of History: A report about the experiences of an during the study of the Armenian Genocide? (Prof. Dr. Wolf-Dieter Just, Evangelical Academy of M?hlheim)

– ?Nobody can come out of his nation?s history? (Jan Amery) (Huberta von Voss, journalist, )

– ?Against the moment of rage? (Betinne Reichelt, writer, )

– ?The portrait of hope: The Armenians? A presentation of Huberta von Voss? Publication? (Bishop Dr. Wolfgang Huber, President of the Protestant Church of Germany, Berlin)

– ?Injuries of the past ? signs of the future? (Helmut Donat, editor and publisher, )

The following translations can be found in the fifth section on ?Eyewitness Accounts?:

– ?Golgatha: The dreadful year of the Turkish-Armenian clergymen and its community (Nor Ghevontiank)? (Theotig)

The last part of the publication, the Annex, includes the following documents:

– The position of the Assembly of European Churches on the occasion of the 90th anniversary of the Armenian Genocide.

– ?Remembering for the sake of reconciliation?:

– The statement of the Council of Evangelical Churches of on the occasion of the 90th anniversary of the Armenian Genocide.

– ?Armenia Verdict?: The statement of the PEN International Writer?s Association.

– ?Memory of the 90th anniversary of the beginning of the Armenian deportation and massacres?: Resolution presented by the German party CDU-CSU

– Text of the debate in the German Parliament, topic number 6, discussions around the resolution of CDU/CSU, 21 April 2006.

– ?Transforming the memory of the Armenian fate to a starting point for reconciliation?: The statement of the SPD party.

– ?Memory of the deportation and massacres of Armenians (1915): should help reconciliation between Turks and Armenians?: The resolution of the SPD, CDU/CSU, B?NDNIS 90/DIE GR?NEN and FDP parties.

The above publication, the first book in German to come out of the Catholicosate of Cilicia?s publishing house, is proof of the expanding international efforts of the Catholicosate. It introduces authors to the viewpoints and knowledge present in German intellectual circles in relation to the Armenian Genocide.

The Imperial Government of Germany was an ally of the during the First World War and an accomplice in the Armenian Genocide. The current

Federal Republic of Germany, which holds about 2.5 million Turks or Turkish-Germans within its boundaries, has friendly relations with the . It is only recently that started to review these friendly ties, particularly in light of ?s EU bid. Thus, it was on 21 April 2005 that officially debated the Armenian Genocide in its Parliament for the first time and unofficially recognized the truth.

The Armenian Genocide has started to be widely discussed in . The media often talk about the subject and interested and knowledgeable people can be found in student circles. Scholars and publishers continue their work in the field.

The Turkish side does not remain silent, however. Fanatic Turks organized unsuccessful protests against Armenian ?lies? on March 15 and 18 of this year. Amid the interest of Germans in the issue and the denial of Turks living in , this publication will no doubt play an important role.

Source: Press Release of the Armenian Catholicosate Of