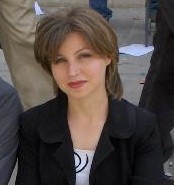 Royalty for a Year: Elects a Beauty Queen (Discreetly)

Under Tight Security and Limited Audience, the Beauty Pageant Show Went On

, April 5, 2006 – While Iraqi politicians compete ferociously over who will be the next prime minister, nearly a dozen young Iraqi women with different backgrounds and creeds managed to compete peacefully for a beauty title.

The 60th annual Miss Iraq Pageant was held in today, an event that was much shunned during the last decades.

After a two-hour ceremony under tight security, Tamar Goregian, 23, the first Armenian Iraqi to win the pageant, officially became the “Iraqi Queen of Beauty.”

The pageant, held at a heavily guarded social club away from the media, wasn't accessible to the public.

The audience contained mostly friends and family members of the contestants. Days before the event, nine contestants, including five Muslim girls, withdrew, fearing repercussions for participating in a “taboo” competition. Eleven contestants remained.

In the years that followed the invasion of , the pageant took place in an exotic hotel in among the exiled Iraqi community.

This year's one-day, underground event — with a limited stage, no designers and no choreographers — contrasted sharply with the usual weeklong celebration and rehearsals.

The Show Must Go On

Despite the curtailed program, the 11 women gave it their best. The contestants paraded, then split into two groups and strutted their stuff in casual wear as a guitarist played rock music.

After the musical recess, the contestants donned one-piece bathing suits, sarongs, hats or silk robes. After the evening gown competition, six girls were nominated as finalists.

Audience members jotted down the name of their favorite contestant and then the panel of four judges weighed in. Goregian received the most votes from the audience and from the judges, earning her the title.

Aside from queen of beauty, the audience also elected a teen queen and a queen of grace.

Pageant organizers hope to send the winner to the New York-based Miss Universe Pageant, in an effort to present a positive image of Iraqi women. The last time sent a delegate to a beauty pageant was at the Miss Universe contest in 1972, when Wijdan Sulyman represented the country in .

Organizers and local club owners banned photos and media coverage to protect the girls from hard-line Islamists who call such contests a “Zionist creation.”

Pageant organizers, who asked not to be identified for security reasons, hope that the new Miss can get a sponsor to pay the Miss Universe entry fee and help her prepare for the event.

“Pageants give women an edge to represent Iraqi costumes and culture, and show that Iraqi women are beautiful and intelligent,” a pageant official said.

A organizer believes this year's winner will be given more opportunities than previous titleholders. The new queen will probably travel the world to create awareness about Iraqi women's issues and rights.

“We will train the new winner and get her prepared for the Miss Universe Pageant, with etiquette lessons, media communication skills, and PR skills,” the organizer said.

Goregian can't wait for the challenge.

“Miss Universe would be a great experience for me. It would broaden my horizon and if I get a chance to compete, I may encourage girls to share this experience and encourage them to enter the [next] beauty pageant.”

She also hoped that events like these would help put an end to the violence has been witnessing in the last three years.

“Maybe beauty is the final step to end violence and preach world peace after all,” she said. “The power of beauty surpasses the ugly face of politics and greed.”

The young woman added that one day she wanted to own her own business and maybe even become a politician.