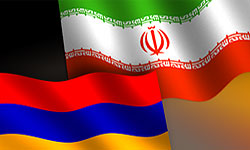 Armenia's ambassador to Tehran Karen Nazarian said that Iran's popularity has been on the increase among his fellow citizens due to Islamic Republic's policy and specially after a ceremony held by Iran in the city of Isfahan to honor the memory of Armenian martyrs.

Speaking during a meeting with Isfahan's mayor, the envoy pointed to the two countries' positive relations, and praised the Iranian people and government's support for Armenians and settlement of Armenian families in the city of Isfahan.

He further said that mutual ties between Isfahan and Yerevan as sister cities would result in all-out and sustainable development of both cities, and reminded that the positive ties between the two nations in the past centuries have caused proximity of the two countries' cultures and arts.

“Existence of monuments with Islamic and Iranian architecture in Armenia substantiates the same fact,” Nazarian continued.

He further proposed arrangement of Armenia's cultural week in Isfahan, and pointed out that his country's art, painting, music and handicrafts have always received a wide welcome among Iranians.

The ambassador also appreciated Isfahan's municipality for rendering support and paying attention to the Armenian population residing in the city, and said, “Holding of the ceremony to commemorate Armenian martyrs in the city of Isfahan has received a wide coverage in the Armenian press, a fact that has increased Iran's popularity among Armenian nation.”

The Mayor further described age-old settlement of Armenians in Isfahan as an indication of the affinity of the city's Muslim population for the followers of other religions, and said that Isfahan's municipality has repaired and reconstructed one of the well-known districts in the city (Julfa Neighborhood), where Muslims and Armenians conduct a peaceful life alongside each other, to preserve the area as a precious gem displaying coexistence among divine religions.

He also reminded that Isfahan was selected as the cultural capital city of the world of Islam in 2006, and said, “In addition to its cultural and historical potentials, Isfahan is an influential and active city in grounds of education, commerce and industry, and thus, we are prepared to exchange information and experiences with sister cities, particularly with Yerevan.