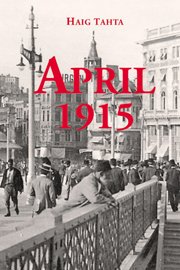 A new historical novel, “April 1915″, was launched yesterday at Armenian House in . The event was attended by friends, family, members of the British Armenian Lawyers Association, and other published authors.

Haig Tahta, the author of the new novel, is a retired lawyer. His interest in Ottoman history stems from his family background, as well as his undergraduate years at .

The evening was opened with a few words from Ara Sarafian, the British historian. Sarafian gave a brief account of the book. He said that April 1915 is an insightful work on how the everyday lives of 3 families, 2 Armenian and 1 Turkish, were changed by the calamity of the Armenian Genocide. According to Sarafian, though Tahta's book is fictional, his historical facts and sense of social milieu are remarkably accurate.

Sarafian stated that Tahta made good use of a fictional writer's freedom to tell history in a more interesting way.??

Haig Tahta talked about his personal journey writing this book and the audience was keen to understand what inspired him to write the book, having practiced as a lawyer for so many years. Haig's journey started when he wrote his family history after he retired. It was then that he realised how much he liked writing. He tore up the family history after receiving feedback from a friend who was a professor of English at the , and it was from that point that he started to write “April 1915.”

His characters made him write more

Haig continued to talk about the process of writing. He became so engrossed in his story that when he went out shopping he could not understand why people were not talking about the siege of Van!

1915″ but he felt that his characters almost took over his story and made him continue writing.

Astrid Khatcharian, author of Affinity with Night Skies, was also present at Tahta's book launch. Both authors have been inspired to write about their family members. In April 1915 two of the characters are modelled on Haig Tahta's grandfathers. Even though Tahta's family did not discuss the Genocide directly with him, he grew up overhearing family members discussing the Armenian Genocide.

Haig's three children and eight-month-old granddaughter were also present at the book launch. When asked why he had written the book, Haig said, “I want my granddaughter to know her history. I often want to kick myself for not having asked my parents about the past. When you're young, you often don't have an interest in history, and then you get married, work towards your career, and by the time you have time to ask questions, it's too late.”

Published in association with the Gomidas Institute and distributed by Garod Books Ltd.

Description of the book in Garod Books Ltd. website:

PRESS RELEASE by the Armenian Community of

Original title of the press release: