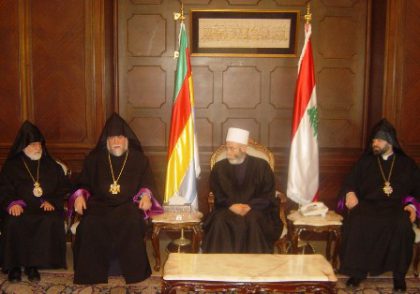 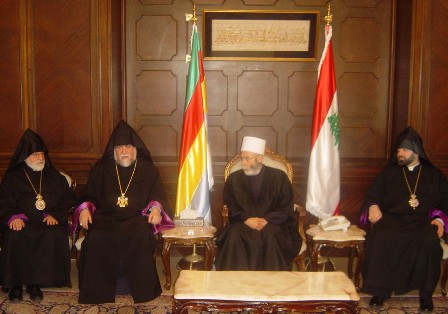 His Holiness underlines the need for mutual trust following a visit to the spiritual leader of the Druze community.

His Holiness Aram I paid an official visit Monday morning to the spiritual leader of the Druze community in Lebanon Sheikh Nayim Hassan. The purpose of the visit was to congratulate Sheikh Hassan on the occasion of his election. The meeting also provided an opportunity for the two spiritual leaders to discuss the current situation in Lebanon.

The Primate of the Diocese of Lebanon Bishop Kegham Khatcherian Archbishop Gomidas Ohanian and the Armenian community's representative in the Christian-Muslim Dialogue Committee Dr. Jean Salmanian accompanied the Pontiff during his visit.

The Catholicos made the following statement to the press after meeting with his counterpart:

“During the meeting with Sheikh Nayim Hassan we discussed the current situation in Lebanon. The persistence of this situation can't be tolerated anymore. The country faces a serious economic crisis the people find it difficult to secure their daily living the international community follows with pain and concern the developments in Lebanon and we still continue to further deepen and complicate the conflict.

We have said it before and we repeat today: Lebanon is a country of coexistence a family of communities. No side has the right to impose itself. Problems should be solved with the spirit of coexistence and through mutual compromise and dialogue. The scene in the street last week does not conform to Lebanese values.

Should others tell us what to do look for solutions for us? Don't we have the maturity to solve our family's internal problems? Instead of feeding the conflict with accusations against each other we should sit around the dialogue table.

I read in the press last week that most of the bridges destroyed by Israel have already been reconstructed. This is a joyful achievement. However it is very sad that while we're reconstructing material bridges we have started to destroy the bridges deeply rooted in our souls. We should first reconstruct the latter and these bridges can't be rebuilt with foreign assistance only but with the collective faith will and mutual trust of all the Lebanese. It is essential that the bridges of mutual trust between the members of the Lebanese family are strengthened through dialogue compromise and understanding. Let's not wait for the other to do this; we should do this. Let's not wait for tomorrow; tomorrow might be too late.”

Photo: Aram I visiting the spiritual leader of the Druze community in Lebanon Sheikh Nayim Hassan on Monday 29 January 2007. From left: Archbishop Gomidas Ohanian His Holiness Aram I Catholicos of Cilicia Sheikh Nayim Hassan and Primate of the Diocese of Lebanon Bishop Kegham Khatcherian.