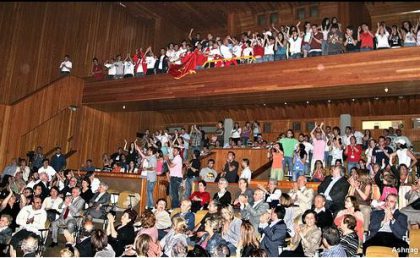 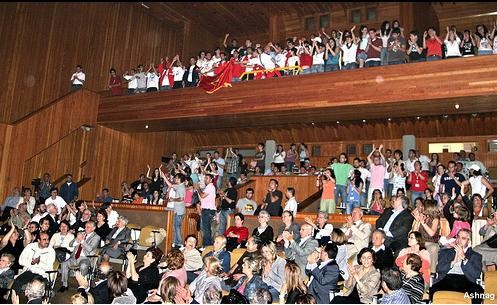 ARF Dashnaktsoutiun's 117th anniversary in Cyprus resembled more like a street demonstration rather than an Armenian traditional happening, that brought together not only Dashnaktsoutiun supporters of Cyprus but also the hundreds of HMEM athletes and officials who had arrived for the Cyprus HMEM regional Games, that had concluded a day earlier.

Youth drowned songs with their chants while Hratch Gaydzagian and Shakeh Baghdassarian sang, Cyprus Hamazkayin Oshagan's “Sipan” Dance Ensemble showed off their moves while the crowd cheered for more, and a capacity crowd at PASIDY Concert Hall, sang “Menk angeghdz zinvor enk”, while video cameras rolled and digital cameras and mobile phones snapped and flashed to save the moment, sending images of the day across the globe, long before Gibrahayer and the Internet community would write about the the birthday party of the Dashnaks that was celebrated last Sunday, in style.

The number one political force in Cyprus,  literally started from scratch in the mid 80s going through two turbulent decades of re-organisation, fighting off efforts to marginalise not only the ARF Dashnaktsoutiun, but Armenian political thinking from community processes.

In celebrating the 117th anniversary of ARF Dashnaktsoutiun, its members and supporters in Cyprus effectively celebrated victory against established ways of looking and living and the establishment of a progressive and youthful process that brought the winds of change in our community.

Although the mandate is still fresh and serious political and educational issues remain unresolved, we can all be hopeful and take heart, knowing… that there is NO turning back now !

For more images from the event as well as other images from Markar Toumanyan's web album including images of April 24 commemoration in Beirut please click on the following link: http://www.flickr.com/photos/markartoumayan/show/