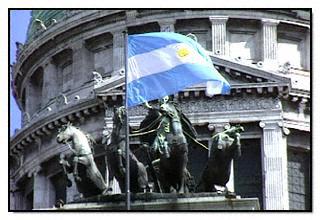 The lower house of Argentina?s parliament adopted late Wednesday a resolution recognizing the 1915-1918 mass killings and deportations of Armenians in Ottoman Turkey as genocide.

The bill overwhelmingly approved by the assembly declared April 24, which sees annual commemorations of more than one million genocide victims in Armenia and its worldwide Diaspora, an official ?day of mutual tolerance and respect? among peoples around the world. It gives Argentine citizens of Armenian descent the legal right to be absent from work or university classes on that day.

There was no immediate reaction to the move from , which has strongly condemned similar resolutions passed by about two dozen other nations and insists that the mass killings did not constitute a genocide.

The bill has to be approved by the Argentine Senate in order to become a law. Officials in say the upper house could discuss it as early as next week.

is home to tens of thousands of ethnic Armenians, most of them descendants of genocide survivors. They have long been lobbying the authorities in to officially recognize the genocide. Neighboring , which also has an influential Armenian community, did so several years ago.

Same piece of news from an ARF source: Yerkir weekly published in

YEREVAN (YERKIR, 30 November 2006) – Argentina Parliament members unanimously paid respect to the Armenians by passing a law that recognized the crime committed by the Ottoman Empire against Armenians in 1915-23.

The draft was suggested by the Armenian Revolutionary Federation's Hay Dat Committee of and sponsored by several members of the Argentine Parliament.

The draft was originally scheduled to be voted on November 16 but was delayed following the pressure from the parliament's Turkish caucus. However, after the Armenian community launched an e-mail campaign the draft was included in the November 29 session. At least 8 MP's spoke about the draft that passed with 175 votes in favor and 2 abstentions.

The decision was accepted with applause from the Armenians who were present during the session.

The law that has still to be ratified by the Argentine Senate, designates every April 24 as Day for Tolerance and Respect between Nations in memory of the “Genocide of the Armenian people,” in the spirit of making it a lesson for future plans; allowing ethnic Armenians serving in public offices to freely participate on every April 24 in commemoration of the crime committed against their nation; and allow Armenian students of primary and secondary schools to miss classes on April 24.