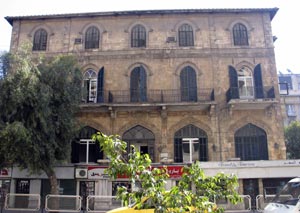 , – A bill for Monsieur Lawrence sits in a display cabinet at ?s Hotel Baron, where the guest list reads like a Who?s Who of the 20th century.

The 1914 bill belonged to Lawrence of Arabia and despite the rumours, the enigmatic British intelligence officer did pay it, hotel owner Armen Mazloumian insists.

?I don?t know where the story that he didn?t came from. One journalist must have written this and others copied without bothering to check,? the Armenian manager said over a beer at the hotel?s oak bar.

Almost a century since it opened, the Baron hotel still attracts visitors nostalgic for an age when the ancient Syrian city of with its vast citadel attracted spies, explorers and colonialists.

The Baron has been buffeted by the political and financial swells of an unstable region but it still holds a special place in some visitors? hearts.

If Mazloumian likes a customer, he offers them the room where Agatha Christie stayed. Beside the room, a poster advertises the ?safety, rapidity, economy? of a seven-day journey from to on the Orient Express, a journey which inspired one of Christie?s most famous thrillers ?Murder on the Orient Express.?

But if that room is occupied, a guest might find themselves in the room used by T.E. Lawrence, aviator Charles Lindbergh, Turkish leader Mustafa Kemal Ataturk, or King Faisal of .

The latest blow to the Baron was this year?s war between and ?s Hezbollah guerrillas, which hit tourism to the volatile region.

?It is still touch-and-go. Last year we covered our costs. This year does not look so good,? Mazloumian said.

boasts Roman ruins, crusader castles and religious sites but it has faced political isolation, partly because of its role in neighbouring . Nonetheless, the number of tourists visiting the country rose 12 percent in 2005.

The Baron?s bar lounge still has Thonet chairs dating from the 1930s and British leather armchairs in desperate need of upholstering.

A map hangs on one wall showing the region?s archaeological sites, including in the northwestern Iskandarun province, which the French gave to in 1938.

occupied from 1920 until 1946. The Baron flourished during this period and on through the early years of the republic, until socialism started creeping in in the late 1950s, culminating in the 1963 Baath Party coup and heavy nationalisation of the economy.

?Our family has had nothing but bad luck,? Mazloumian said.

His father was a client of ?s Intra Bank, owned by Palestinian Youssef Bedas, and he lost a large part of his fortune during a run on the bank in the late 1960s.

As the hotel has fallen into genteel disrepair, the world outside its doors has changed too. Parts of , a favoured tourist haunt in ?s northwest with a bustling market, were razed to build roads and avenues, mostly in the 1970s.

But for some, the Baron is still the place to go.

?If you want to know who is in town, go for a beer at the Baron?s terrace. It has become an archaeologists? hotel,? said German Kay Kohlmeyer, who had been working on a dig nearby.

The breed is no stranger to the Baron. worked as an archaeologist in northern , where he met Gertrude Bell, a British linguist and traveller who played a major role in creating the modern state of .

, known as the ?Queen of Iraq?, also stayed at the Baron.

Also published in “Khaleej Times” of on 6 November 2006