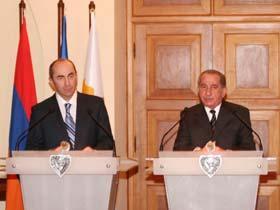 The President of Armenia Robert Kocharyan concluded a three-day state visit to , the first visit of the Armenian leader since it gained independence 15 years ago.

The Armenian President, accompanied by Foreign Minister Vartan Oskanyan and a 30-member delegation, was welcomed at Larnaca airport by Acting Foreign Minister, Minister of Agriculture, Natural Resources and the Environment Photis Photiou.

Kocharyan began his official program on Thursday, with a meeting with President Tassos Papadopoulos at the Presidential Palace. The official talks included an agreement on co-operation in combating organised and other forms of crime that was signed by Minister of Justice and Public Order Sophocles Sophocleous and the Minister of Justice of Armenia Davit Harutunian.

Kocharyan later met House President Demetris Christofias, while Foreign Minister George Lillikas hosted a lunch in honour of the President of Armenia. After that Kocharyan met with Archbishop Chrysostomos II.  The day ended with a state banquet hosted by President Papadopoulos.

On the same day, Armenian Central Bank Chairman Tigran Sarkisyan had a meeting with officials at the Central Bank of , while Deputy Culture Minister Gagik Gyurjyan signed a memorandum of cooperation that renews a bilateral education and culture program for the years 2006-2008, while late on Thursday evening, an Armenian ministerial delegation visited the Kalaydjian Rest Home in .

On Friday, Kocharyan visited Nicosia Town Hall where he met the Mayor of Nicosia Michalakis Zampelas who presented him with the golden key of the city and accompanied him to a visit to Nicosia within the walls and the the cease-fire line that separates the only divided city in Europe.

Later on, Kocharyan and his delegation – always accompanied by Armenian representative in the Cyprus Parliament Vartkes Mahdessian – visited the Nareg Armenian elementary school in and met with the Armenian Archbishop and had a meeting with the Temagan and Varchagan Bodies of the community. He also took a moment to pay his respect to the victims of the Armenian Genocide by placing flowers at the Genocide Memorial.

Much to the community's dismay the festive dinner that was to take place at a Nicosia Hotel and the community gathering, was substituted by a low-key get-together at the Church on Friday morning, while in the afternoon President Kocharyan laid the foundation stone of the monument to commemorate the arrival of the first survivors of the Armenian genocide at the Larnaca Marina (old port) Finikoudes Promenade, in a touching ceremony that was addressed by Armenian representative Vartkes Mahdessian and Armenian Foreign Minister Vartan Oskanyan.

The local media gave extensive coverage to the Armenian visit, that is to be reciprocated in in early 2007. Our community lived moments of joy and pride, witnessing the reality of Armenian statehood blossoming before our very eyes. Unfortunately the community will also remember the three day Armenian visit with protocol mishandlings and the interventions of the few for agendas that will surely surface once the dust of the visit settles.

There are differing opinions about the schedule, orientation and emphasis to the various events organised by the personal initiative of the Ambassador of Armenia Vahram Gajoyan. Our community is already drawing its conclusions and putting the pieces together. To that end we have received emails that we will publish in the next issue [you can read Gibrahayer at: http://gibrahayer.cyprusnewsletter.com]