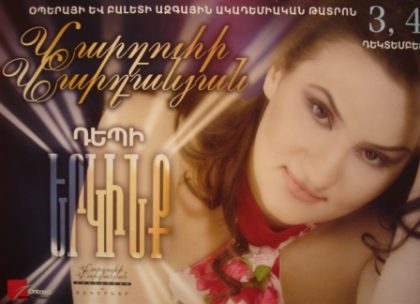 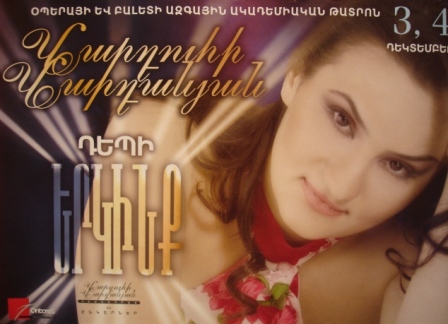 On Sunday, October the 15th 2006, and Diaspora lived a nightmare. Armenian famous singer, 30 years old Vartuhi Vartanian had died in a car accident. It happened at about 2:30 PM on 17km of Sevan-Mardouni-Kedap highway. The Police department informed that the singer?s car BWM 520 had ridden out of the highway and turned over. Two other passengers had been in the car, Arman Khachadurian (born in 1977), and Yeghishe Verdian (born in 1974), they had been taken to the hospital with heavy injures.

Vartuhi Vartanian is an exceptional new-generation Armenian jazz and soul vocalist that with her unique and sophisticated style will definitely amaze anyone. Her superior ability to deliver Armenian soul music through the contemporary multi-faceted vocal interpretations is astonishing.

Vartuhi had been graduated from (named after V. Brusov) but she didn?t choose that path and determined to sing. ?Song has been always guiding me? she said. Song didn?t let her deal with another Art. Actually, she didn?t like to concentrate on one specific thing and liked alterations. And this idea went with nearly all the domains of life as well as music.

After graduating the Jazz Department at the Yerevan State Conservatory, Vartuhi became a valuable part of the Armenian jazz community by joining the director of the State Song Theater and composer Arthur Krikorian.

The endless list of Vartuhi Vartanian?s achievements and winning performances included active participation in international festivals and competitions in , , , , , F.Y.R. of , , and . She had won 8 prizes in major international competitions for . 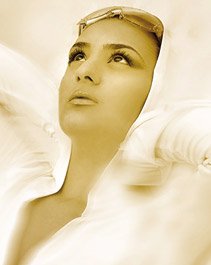 Beside her own album, she participated in both Souren Kniazian?s Songbook CDs volume 1 and 2, and her song ?Ser? (Love) was a number one hit. She participated in the project ?Hayuhiner? together with Anna Khachadurian, Armine Nahabedian and Sofi Mkheian, releasing 2 albums. She also put her voice in Arsen Krikorian?s Songbook through the lovely duet with Anchok entitled ?Sirel Hanun Siro? (To love in the name of Love). She sang duets with Shushan Bedrossian, Sirusho, Andre and other Armenian pop stars. Her latest one was with Arman Aghajanian ?Lost Lover?.

Before the tragic accident, she was working on her second album. ?My new CD is going to be a specific album of good old friends and soul mates, and I hope the listeners will appreciate my new approach to music?, these were her words, but Unfortunately, her dream to release a duet album with her friends and colleagues didn't come true. The album is unfinished; the singer is gone forever…

Vartuhi was well known of her humanity and big sense of humor. She was a friend of people from different ages. Shushan Bedrossian, Avet Parseghian, Aramo & Emma Bedrossian, Hayko, Andre, Dikran Bedrossian, Arsen Krikorian? were all her best friends, but her closest were Sirusho and her parent, Suzan Markarian and Hrachya Harutyunian. They were like a family to her.

Today, no words can balm the wounds of those who knew, loved and worked with the singer, since their loss is too great. But let's not forget that Vartruhi Vartanian was first of all an artist, a real, talented artist, and as we know, Art lives forever. For an artist like her, earth life is just a period of self-realization, a sort of mission to make the world beautiful. Vartuhi Vartanian did not manage to fully complete her mission in this world, but her songs will stay with us, they are the reflection of her soul and the whole inner beauty of an individual, an artist. Since her music is alive, Vartuhi Vartanian will live in our hearts forever?

On 3, 4 December 2006 two benefit concerts under the name ?Tebi Yergink? (To the sky) are going to take place with the participation of all Armenian pop stars at the State Academic Opera & Ballet Teather of Armenia (named after A. Spentiarian). All the stars will dedicate this concert to the memorial fund of their best friend: the late Vartuhi Vartanian. The benefit from the concert will go to this fund which is engaged in the propaganda of Vartuhi Vartanian's art of singing, her future music distribution and for the benefit of her eight year old son, Rupen Avoian.

To all those who consider it their duty to be faithful to this holy mission.

This tragedy is a great loss for the Armenian nation, Armenian culture and art. Vartuhi Vartanian will always be in everyone's heart.