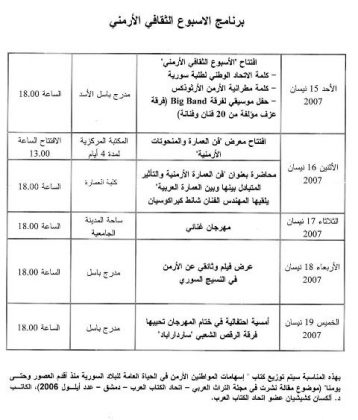 See below program in Arabic language

Under the patronage of the Armenian Prelacy in Aleppo and the National Union of Syrian Students, “Armenian Cultural Week” is scheduled to take place this year from 15-19 April 2007, in the University of Aleppo.

The attendants of last year's events will remember how popular were the cultural performances, especially the dance group.

Schedule of the Armenian Cultural Week:

Exhibition of Armenian Architecture will be inagurated in the Central Library on 16th April 2007 (01:00pm). On the same day Shant Giragossian will lecture in the Facultry of Architecture on the mutual influences between the Armenian and Arab architecture schools, especially in the pre-Islamic Syria (06:00pm).

The program on 17th April 2007 will include a festival near the student campus. Details will be announced later.

On 18th April 2007 a documentary film will be displayed highlighting the role of the Armenians in the Arab textile art and industry. Location: Basil Amphitheatre (06:00 pm)

The closing cermony will certainly be a memorable one, with the active participation of famous Sardarabad Dancing Group. Location: Basil Ampitheatre, 19 April 2007, 06:00pm

On the occasion of the Armenian Cultural Week a booklet titled “The contribution of the Armenian citizens in the Syrian public life (from early times up to the present day)“, will be published. The same is previously published as an article in the Arab Writers' Union “Arab Heritage” magazine (September 2006, Damascus, Syria), written by Dr. Alexan Keshishian.

We would like to thank Caroline Msrieh and all her colleagues at www.komagan.org for the provided information.

Below is the program of the cultural week in Arabic language: 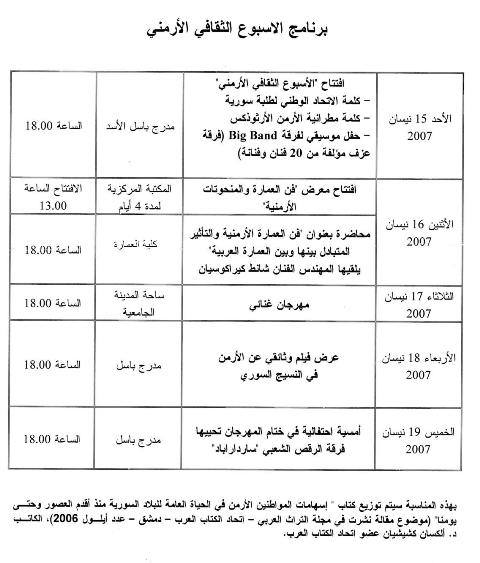 Photos (Click on each photo to see a larger version):