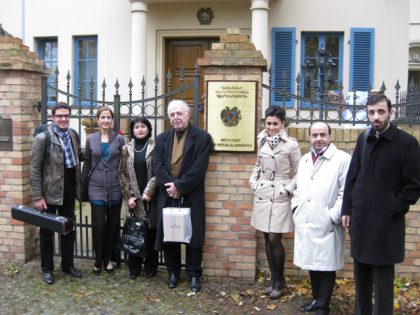 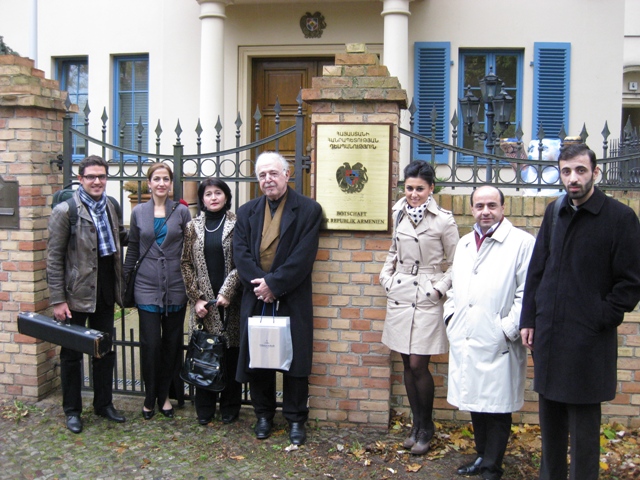 They have a great role in preserving Armenian identity

In celebration of the 20th anniversary of independence of the Republic of  Armenia on August 30, 2011 the Minister of Arts of the Republic of Armenia Hasmik Poghosyan signed a decree to reward the German living singer Vardeni Davidian, pianist and composer Armine Ghuloyan, saxophonist Koryun Asatryan with golden medals for their noteworthy contribution in developing and preaching Armenian culture.

The official rewarding ceremony took place at the Embassy of Armenia in Germany on October 26, 2011. The gifted musicians received their rewards by the Extraordinary and Plenipotentiary Ambassador of the Republic of Armenia Armen Martirosyan.

The Ambassador Martirosyan made a speech emphasizing that the task of the Armenian musicians living abroad is presenting and advocating Armenian culture to the foreigners. Meanwhile, the Ambassador offered his mediation in organizing the German-Armenian musicians concerts in Armenia. A speech was also made by the President of the German-Armenians Central Council Azat Ordukhanyan who agreeing with the Ambassador?s viewpoint in the meantime stated that in addition to the above mentioned activity and perhaps more important is that our musicians enter communities and present their music – Komitas, Babajanyan, Khachatryan, to the Armenian children who live far from their homeland and its educational system. Mr. Ordukhanyan stressed that the musicians and the teachers living outside the Republic of Armenia are to present the Armenian culture to the diaspora -living young generation in order to preserve our identity and develop it under a foreign sky, remain Armenians and fight for our common dreams.

Driven with patriotic spirit, Armenian culture and arts presenting and advocating ideas, aesthetical taste and patriotism inspiring and at the same time irreplaceable members of the Armenian Community are Armine Ghuloyan and Vardeni Davidian. Along with their art they also do community services. Both are members of the Armenian Academic Union, are paying members and have been participating in numerous community-held projects and giving concerts in communities and unions over years. Moreover, Armine Ghuloyan was among the first to initiate the reestablishment of the?Armenian Academic Union-1860? which is a scientific-cultural organization. And when on January 7, 2001 it was reopened, Armine Ghuloyan was elected as the vice-president of the Union.

Therefore, taking into consideration these facts as well, the German-Armenians Central Council (Zentralrat der Armenier in Deutschland, ZAD) proposed Armine Ghuloyan?s, Vardeni Davidian?s and Koryun Asatryan?s  nominees   for rewarding. Talking about their achievements it is worth mentioning that they have gained indisputable eminence and recognition. Armine Ghuloyan is the author of six books, Vardeni Davidian took the first prize and ?Grand Prix? in the Korean International Vocal Competition in Germany and since 2004 has worked in Bonn Opera. 26-year-old Koryun Asatryan who has already managed to get to the heights of the German saxophone art and take his permanent place in the German media is a prizewinner of numerous European competitions.

Photos: From the ceremony in the Embassy premises on 26 October 2011.

* Ofelya Sargsyan is based in Flensburg, Germany. The report was filed on 22 November 2011 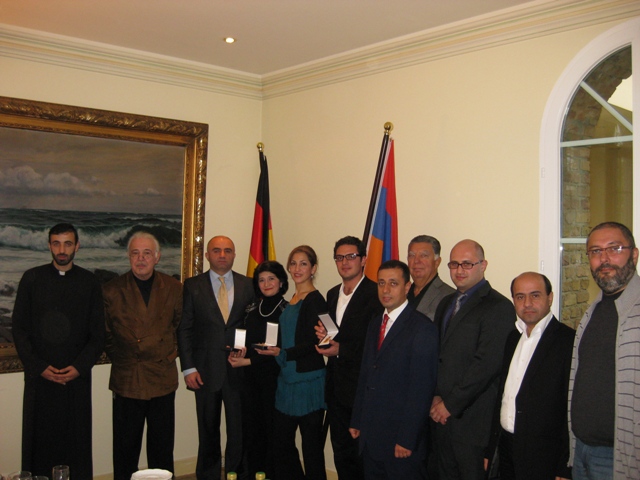 Newer PostGacia Boyadjian: Balancing personal life with scientific career is one of the biggest challenges of a female scientist
Older PostArmenian stand at UN Day celebration in Tashkent