Back in 1947 the United Nations General Assembly declared 24 October the anniversary of the “Charter of the United Nations“. In 1971 a further resolution was adopted declaring that the UN Day shall be an international holiday, recommending that member states observe it as a public holiday.

United Nations Day has traditionally been marked throughout the world with special events.

As a host for more than 400 students from nearly 40 countries, the Tashkent International School (TIS) – established by the local UN Department in 1994 -, celebrates the UN Day every year.

This year's theme was taken from the Secretary-General's announcement, which focused on “ways the United Nations makes a difference in everyday life.” The annual festival held in TIS consists of international concert, wide range of activities, including cultural performances and displays from different countries.

This year Armenia had the opportunity to participate in this event for the first time. Armenian spiritual and cultural heritage masterpieces were displayed, with colorful booklets and publications highlighting the history and beauty of Armenian destinations.

Some young volunteers from the Tashkent Armenian Cultural Centre helped organize the event and did all their best to fill the absence of Armenian diplomatic mission in Uzbekistan. With great enthusiasm they welcomed and drew the attention of multitude visitors to the Armenian stand. “Small Armenia” had many visitors including TIS students, their parents, expatriate businessmen and members of the diplomatic corps accredited to the country, including George A. Krol, the U.S. Ambassador to Uzbekistan, who was briefed on topics such as the history of Armenian Alphabet and its inventor Mesrob Mashtots, the unique Armenian cross-stones (Khachkars), the tragic moments in the Armenian  history, which led to the setting of Armenian Diaspora all over the world, etc.

While performing the emotional and much-loved khochari dance the local Armenian Urartu traditional ensemble of folk dance was warmly greeted by the international audience.

The colorful state symbols were waving every 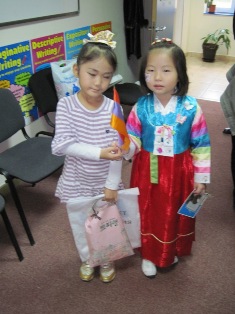 where in the air at the culmination of the event. Armenian flags were also among them. Children who wished to decorate their faces with the Armenian tricolor looked especially excited.

Twelve years ago when the 6 billionth baby was born, UN identified the place of birth Sarajevo (capital of Bosnia). This year the United Nations decided to leave to each country the honor for deciding who is the 7 billionth citizen. Armenia was involved in this symbolic celebration and a baby boy Vahram Voskanian, born after the midnight of 1st November in the northern Armenian town of Artik was declared to be Armenian's nominee for the occasion.

Garik Hayrapetian, the Executive Representative of the Armenia Country Office of the United Nations Population Fund (UNFPA) noted that five children are born every second around the world so it is not possible to tell precisely who is the 7 billionth child.

A world of 7 billion population poses many challenges in fighting poverty and diseases, securing education, sustaining livelihoods and mitigating climate change. Global problems demand global solutions, before the population of the planet earth swells to 8 billion in just 14 years ahead.