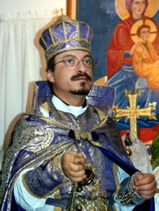 Born in 1962 in the neighborhood of Hajn in Beirut, Lebanon, and given the baptismal name Hagop.  He received his elementary education in the St. Sahak-St. Mesrop Academy and was admitted to the seminary of the Catholicosate of the Great House of Cilicia in 1977.

From 1979 to 1985, he continued his theological education at the Gevorkian Theological Seminary of the Mother See of Holy Etchmiadzin, and in 1985, defended his graduation thesis entitled ?The Study of Printed Texts of Ancient Armenian Manuscripts?.  That same year, he was ordained a deacon and called to serve in the Armenian Diocese of Damascus (Syria).

In April 1986, he was ordained a celibate priest by His Eminence Archbishop Voskan Kalpakian, Primate of the Armenian Dioceses of Greece and Damascus in the Cathedral of St. Sarkis in Damascus, and given the new name Ararat.

In February 1988, Father Ararat defended his doctoral thesis entitled ?The History of the Church in Antioch?, and was elevated to the rank of Archimandrite (Vardapet) by His Eminence Archbishop Nerses Bozabalian in the Church of St. Mesrop Mashtots in Oshakan.

From 1986 to 1990, Father Ararat served in the Diocese of Damascus as Assistant to the Primate.

He enrolled at St. Nersess Armenian Seminary and concurrently at St. Vladimir?s Orthodox Seminary, in New York, U.S.A. in 1996, and later that same year, was appointed as parish priest of St. Gregory the Illuminator Cathedral of the Canadian Diocese in Montreal, while also serving the Armenian churches of Holy Cross as parish priest and St. Mesrop in Ottawa, as visiting pastor.

In October 1999, in appreciation for his years of service and with the blessing of His Holiness Karekin I of blessed memory, His Eminence Archbishop Hovnan Derderian, Primate of the Armenian Diocese of Canada, granted Father Ararat the title of Senior Archimandrite (Tsayraguyn Vardapet).  On the same date, Father Ararat was appointed Vicar of the Canadian Diocese.

In June 2006, Father Ararat was called to Armenia to serve in the Mother See of Holy Etchmiadzin, and one month later was assigned as Dean of the Monasteries of the Mother See by His Holiness Karekin II, Catholicos of All Armenians.

On November 19, 2006, His Holiness Karekin II elevated Father Ararat in rank and consecrated him as bishop.