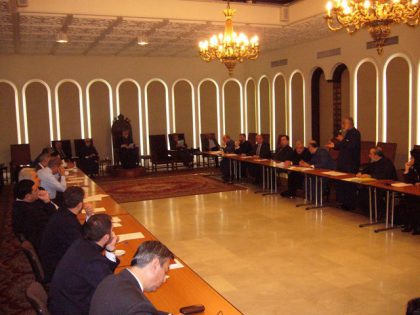 ANTELIAS, Lebanon – His Holiness Aram I convened and chaired, on March 26-27, a meeting between representatives from the dioceses of the Catholicosate of Cilicia and Central Executive Committee with the aim of bringing under the spotlight certain aspects of the work of the dioceses within the general framework of the Armenian Church, and Catholicosate of Cilicia?s mission.

Delivering the opening remarks of the fruitful working sessions stretched over a period of two days, the Pontiff talked about a number of plans related to the Catholicosate of Cilicia?s mission and, through its dioceses, the broadening of the Armenian Church?s mission.

The work of the Christian Education Department was presented by the chairman of the department?s committee, V. Rev. Fr. Krikor Chiftjian and director Rev. Fr. Torkom Donoyan. The presenters focused on those areas of the department?s work that had gained new momentum recently, particularly in the audiovisual and publishing fields.

The Youth Department director, Rev. Fr. Sahag Yemishian briefed the attendants about the department?s projects in general, also talking about the planned pan-Diaspora youth conference to be held in August 2008 in Antelias.

The challenges facing the Armenian schools and Armenian education were an important item on the agenda of the meeting. The head of the Catholicosate?s education office, Sarkis Giragossian, talked about upcoming conferences, planned reviews of educational programs and the reorganization of various aspects related to this field. The Catholicos grabbed this opportunity to praise the Armenian Affairs Department of the Calouste Gulbenkian Foundation and its director Dr. Zaven Yegavian for its continued support of the Catholicosate?s efforts in the field of Armenology and education.

An important issue taken up during the meeting was the construction of a village named ?New Cilicia? in Nagorno Karabakh, an initiative which falls under the Catholicosate?s national mission. The project was presented as the would-be outcome of the joint efforts of all the Catholicosate?s dioceses with the clear separation of labor and responsibility.

The Primates then made presentations about the spiritual, religious, educational, national and publishing work being carried out in their respective dioceses, at the same time underlining their concerns and difficulties. His Holiness Aram I announced that the blessing of Holy Muron (Holy Chrism) would take place on June 1, 2008. The meeting also decided to convene the General National Assembly in December 2007.
The Catholicos assessed the work of the dioceses for the service of the Armenian Church and nation to be organized and positive. He called on the attendants to ignore obstacles and overcome difficulties and challenges in order to continue the Holy See?s sacred mission.

The delegation of each diocese- the Primate and the National Executive Council- held individual meetings with the Pontiff to discuss special issues pertaining to their diocese. 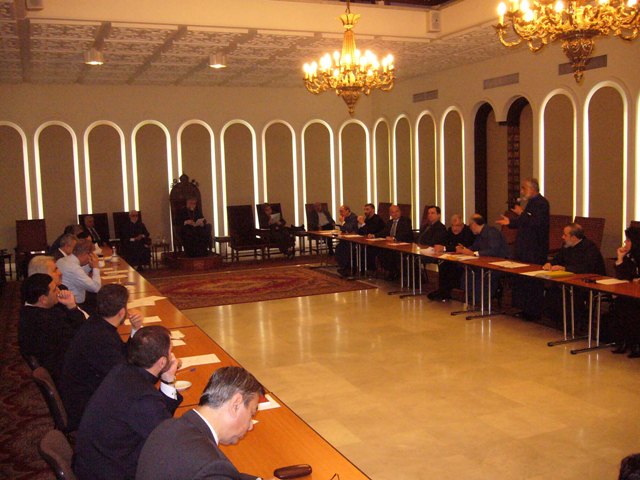