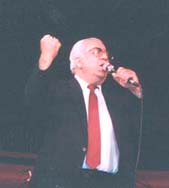 George Tutunjian, the renowned singer of patriotic and revolutionary songs has died on November 7th, 2006 in at the age of 74.

He was born in in 1930. His parents were singers as well. They conveyed their passion of singing to their son, George. He was a scout and athlete in HOMENTMEN (Armenian Athletic General Union).

In the 1960s, he filled the hearts of the young generation with patriotism through his charming songs. He was one of the first singers in who propagated Armenian songs at the mere age of 22, performing works by Sayat Nova, Gomidas and Ashugh Djivan. It was a period when the Turkish language and song was heard in many circles of Cilician Armenians. Tutunjian introduced a new wave of proudly recited Armenian songs.?

In 1986 he moved to with his family and carried on performing and contributing to the Armenian Community there.

In 2002, Tutunjian presented to his fans his ultimate two CDs of 60 Armenian?patriotic and revolutionary songs celebrating his 60 years on stage. He said “I dedicate these CDs to my fans who are motivated and inspired through my songs to support the Armenian nation. I would like to thank all those who were faithful to my music, attended my concerts and supported me in the past 60 years”.

He will be missed greatly by his family, friends and fans all over the world.

In 2001, the Armenian Revolutionary Federation (ARF) Western Region Central Committee honoured him with a medal for his contribution for playing an important role in the spreading of Armenian patriotic and revolutionary songs.