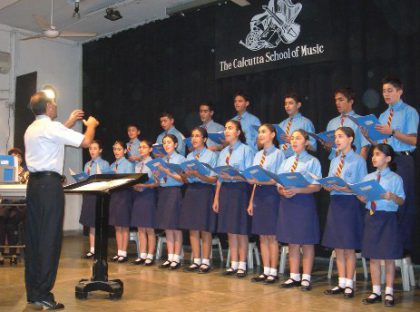 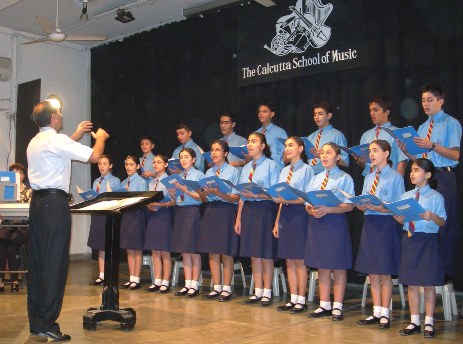 “” Choir of the and Philanthropic Academy (ACPA) gave a concert on 15 February 2006 at the renowned Calcutta School of Music as part of the 185th Anniversary celebrations of the college. The choir song works of a number of Armenian and European composers. The choir also performed the well known Bengali song “Dhitang dhitang soleh”.

Prior to the concert Father Oshagan Gulgulian gave a concise history of the ACPA and Indo-Armenian centuries old friendship, emphasizing the important role Armenians had played for the development and prosperity of Calcutta. He spoke also about the Armenian songs and music.

“It is a great joy for us to see so many people gathered together at this famous school of music. I am sure by listening to the Armenian songs you will appreciate the thoughts and feelings of the Armenian people, as well as have an idea, through music, about a small part of the rich Armenian cultural heritage”, said Father Oshagan.

The concert began with the national anthems of the two countries. “Nazareth” Choir sang a number of songs by the Armenian composers Komitas, A. Babajanian, A. Khachatourian, A. Eranian, T. Altounian and others, which were very well rendered and  the audience expressed its appreciation to the choir and the music teachers and conductors Mr. & Mrs. Vachakan and Narine Tatevossian, amid thunderous applause.

The concert was attended by the committee members of the Armenian Church, Armenian community members, Students of the ACPA and a great number of non-Armenians.

The and Philanthropic Academy: