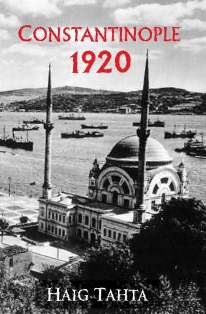 Constantinople 1920, the second book in Haig Tahta's projected trilogy, chronicles the impending fall of the Ottomans and explores the circumstances and atmosphere of Constantinople during the British occupation of the city from 1920 to 1922. It carries forward the same characters from Mr. Tahta?s first novel, April 1915 (See Azad-Hye article here), set in the Ottoman Empire at a critical moment following its fateful decision to join the Great War in November 1914.
?
Olga, an Armenian girl, and Selim, a Turk, are impossibly in love. Their relationship, much more difficult and problematic than Romeo and Juliet, develops and unfolds during the Greco-Turkish War, reaching its shocking climax in the burning of Smyrna. An historical novel of deep insight and high passions, Constantinople 1920 brings to focus a time which echoed throughout the world and set in train events that would engulf Europe in flames a few decades later.
?
Written with a rare sense of humanity and peopled with a plethora of characters, bold, sensitive, articulate and always fascinating, Constantinople 1920 is that rare novel of ideas and drama that appeals to both the heart and the intellect.
?
About the author:
Haig Tahta was born in Manchester of Armenian parents who came to England in the 1920s from Constantinople. The connection with Stamboul continued throughout his formative years when long holidays were taken there with his large extended family. Inevitably, he attained his degree in Modern History at Oxford where he specialised in ?the Eastern Question?. On leaving Oxford, he became a lawyer, remaining in that profession for forty years. During his working life he took a strong interest in the Armenian diaspora.
?
Along with his brother, Dick Tahta, Haig translated the classic Armenian novel, Burning Orchards, published by Black Apollo Press.
?
The first novel of Haig?s projected trilogy, April 1915, was published in 2005. Constantinople 1920 is the second in this series which follows the Avakian family through the collapse of the Ottoman Empire.
?
Constantinople 1920 is published by Black Apollo Press and can be ordered online:
Germinal Productions
1A Flower Street,
Cambridge CB1 2NH
E-mail: [email protected]
Website: www.blackapollo.com
ISBN: 9781900355582
Publishing date: 01 November 2007
?
Read also:
April 1915: A new book by Haig Tahta